2 nights ago we went out for dinner with some family friends to this new chinese restaurant called Wealth Garden. Most of you will probably say where?! This place used to be called Purple Sands and in my head it will always be called that. So over the span of 5ish years it changed from Purple Sands to New Panda (what?!) to New Patterns (huh?) and now its Wealth Garden. I haven't been to this restaurant in quite a while, nothing much has changed, done a bit of renovating and that's about it. So we ordered a banquet. I only took a few pics because everyone was starving and dug in before i even thought of taking a pic. The food was decent, nothing special. All the dishes you would expect to find at a chinese restaurant. 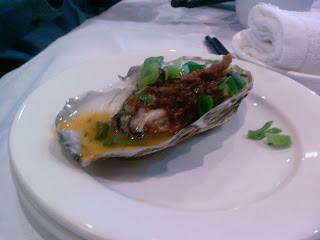 For starters we had an oyster with XO sauce. I love XO sauce, its so fragrant, a tad spicy and just full of flavour. I especially like it with noodles. The oyster was quite big, but that doesn't really mean anything. Sometimes the smaller the oyster, the richer the flavour. The amount of XO sauce was a tad overpowering and a bit too chilli to enjoy the oyster itself. But the oyster was just cooked and was nice and soft and not tough. 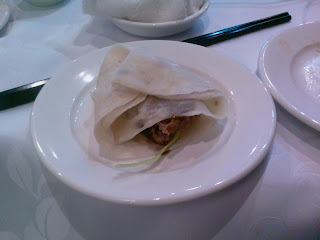 The banquet also came with Peking Duck, one of my favourite dishes. Definitely not the best peking duck around, there was limited skin but plenty of meat. The fat was delicious =P I feel that they could have put a tad more spring onion and cucumber but thats just my personal preference. The pancakes for delicious, just right.
Would i recommend it? I guess yes but don't expect too much.
Posted by teenagefoodie at 4:16 PM