I think I can honestly say that this was probably one of the best meals I've had since I came to HK. And guess where it was? On top of Aberdeen Market. Honkie markets are very different to Melb Markets. It's a whole lot dirtier, wetter, more cramped, smellier and gross-er? One section is fruits and veg, this section isn't too bad. But once you walk into the meat section it's pretty disgusting, they don't pack the meat like the butchers do in Melb. All the meat is just hanging off hooks all around the shop, including pigs heads, trotters, every part of the animal. No fridge whatsoever. Seafood side smells and is wet and slimy. Live fish flapping around for customers to see. All types of seafood. Watching live fish get cut up, live eel cut up into three parts and all parts are still moving.
And this is the type of place where you can get the best dinner. 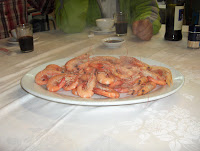 Starter: Blanched Prawns. DELICIOUS. They were extremely fresh and juicy. The meat was firm and full of prawn flavour. Dipped in a bit of chilli soya sauce and it was beautiful. Simplicity wins (as long as it's fresh). 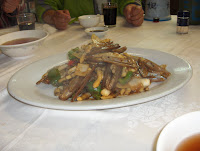 Razor Clams: First time eating razor clams I think. They were stir fried in a black bean sauce. Tastes just like pipi/clam, just a lot more meat. Unfortunately you can get razor clams in Aus so have to make the most of it when you can get it. 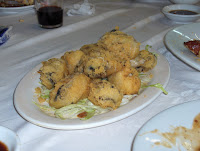 Oysters: Deep Fried Oysters. I thought the batter would be thick but it wasn't, the oyster was just massive. The oysters were just cooked through but still was extremely plump. The oyster flavour wasn't very strong which was good as it can be extremely overpowering sometimes. 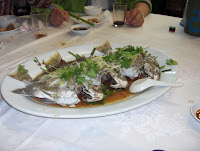 Fish: I have to say that I didn't particularly like this fish, it tasted very different to what I'm used to. It was wild fish from the sea and tasted very weird. I can't exactly describe the taste. 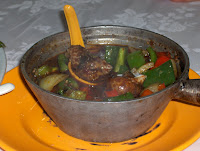 Chlli Whelks: First time eating whelk out of its shell that I know of. It didn't really taste like anything just chewy. The sauce was very chilli and covered the flavour of everything, not that whelks really have much flavour.

Also had a couple of other dishes but didn't get to take a pic of them. Garlic Chicken, Lamb Hotpot.

All in all, a very good meal. Lots of new experiences. It was nice to try new things, although I didn't really like many of them. But you should always try something at least 5 times to really see if you like it or not.

Posted by teenagefoodie at 1:49 AM