Whoops 2 days late. Just a recap of my Christmas Day in HK.
-Woke up feeling sick.
-Ended up eating noodles for brunch in front of the tv (watching nigella lawson make christmas dinner on tv =P)
-Dad decided to make us walk to the Ten Thousand Buddha Monastery an entire suburb away, I was totally puffed walking there thanks to being sick. Body did not like climbing the never ending steps up the mountain to the temple place. Pretty ironic, visiting a temple on Christmas Day....
-Walked around Ikea after visiting the temple. Honkie Ikea is awesome, super cramped but tonnes of stuff. Was going to eat Christmas Dinner at Ikea but the restaurant was too packed so we decided to leave. On the way out there was an Ikea fast food kinda place that sold hotdogs, popcorn and softdrink. Bought a hotdog meal (hotdog and a bottomless cup of soft drink) for $10 (AUD$1.50) Never find that in Melb. Finally had Cream Soda since coming to HK.
-Crashed my Aunty's place for dinner, they don't celebrate Christmas dinner but it felt like it, so much food =.=" 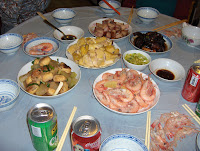 Doesn't look like much yeah? Cos that was only half. It was really good to finally have a home cooked meal after eating out for 2 weeks. The chicken just tastes so much better in HK, not too sure why, it just does. My aunty also made these spareribs that I hadn't had for ages, it's salty and sour, YUMMY!

After dinner the entire family sat in front of the telly and watched honkie drama, I see where my addiction comes from, inherited XD

It's nice to spend Christmas with family.

Posted by teenagefoodie at 2:44 AM