I officially hate flying =.="
I think I have really bad travel sickness :(
So we flew to Sydney first then from Sydney we flew to HK.
Plane is never good right?
We were served lunch on the flight to Sydney. Pumpkin, Leek and Fetter Quiche, sounds good? Well it looks like something right out of the school canteen, those who go to my school would probably agree. Taste? Just like canteen food. I think the people who make these pies have to realise that Fetta cheese is salty and additional salt is most probably not necessary. 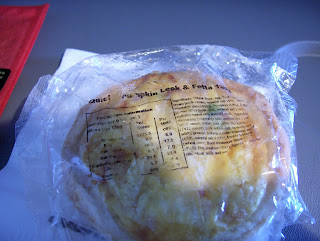 Before we landed we saw some pretty nice scenery. Beaches, coasts, cliffs. 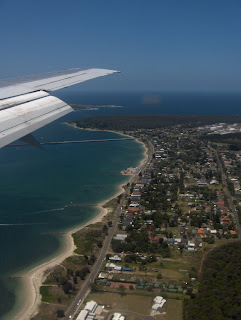 The flight to HK is when I pretty much died. Felt sick the entire way. We were served dinner at 4pm AUS time. Don't think I've actually ever had dinner that early. 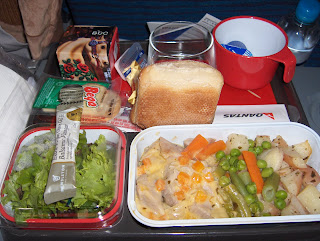 "Slow cooked" pork. It's a nice way of saying overcooked pork. The lemon sauce didn't taste like lemon and was just a cream sauce but it didn't taste too bad. The salad leaves were just horrible. But the best part of the meal was the Belgian chocolate brownie. It was soooo rich and moist I wanted another one. 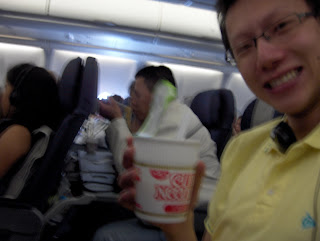 My bro loves to start the "cup noodle craze" on the plane. As there is around 5 hours between dinner and supper people started to get hungry at around 7. Many don't realise that cup noodles are available. So my bro decides to ask for a NISSIN cup noodle and the smell wafts all around the plane and all of a sudden all the flight attendants are doing is walking around serving people cup noodles. The pic above is my bro with his finished cup noodle, and you can see the man behind him stuffing himself with noodles XD 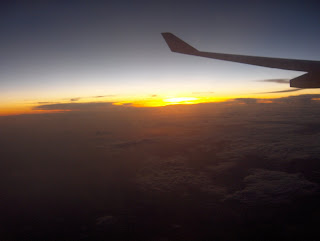 At around 9 Aus time it was sunset time. It was really pretty. I really love sunsets.
So we arrived in HK at around 12:15am Aus time or 9:15 HK time. I was totally wasted by the time I got into bed.
Posted by teenagefoodie at 7:50 PM