Yesterday we went and had Chinese Roast. Unfortunately I had half a packed of mini spring rolls just before parents decided to go out for lunch and therefore I was not hungry at all. We ordered a Roast Goose on Rice, Roast Pork on Rice and a Eight Roasts on Rice. 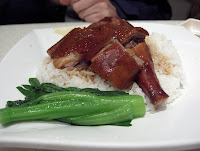 Roast Goose on Rice:  I have to say that this place has gone downhill with their roasts. The roast goose was tough but not very fatty. It was about the standard we get in Australia. At least you get a lot more meat here. 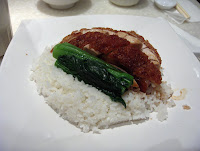 Roast Pork on Rice: I have to say this was the worst dish we ordered. Roast Pork isn't easy to make, but I'm pretty sure they used the wrong cut of meat. The entire piece of roast pork was meat, no fat whatsoever, very disappointed. The skin wasn't crunchy. 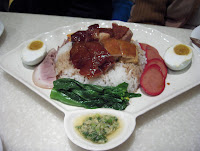 Eight Roasts on Rice:  This one was the best out of the three dishes. The roasts meats were pretty average but I guess it was pretty cheap at just over HK$50. Came with an entire salted duck egg, a treasure in Australia but an average ingredient in HK.

Vedict? Recommend? No, this place was pretty good when I went 3 years ago, but now it's under par. DEFINITELY better chinese roasts in HK, way better. Was quite disappointed.

Posted by teenagefoodie at 3:06 AM