Eating Out: An An Viet Noodles, Station St Box Hill

My friends and I for some reason really like viet noodles. They have got to be up in the top 3 of my favourite noodle dishes. I spent the morning rollerblading, one of my hobbies, and i've gotten worse over the last couple of months thanks to lack of practice. After blading i had to go to school to pick up my yearbook, quite disappointed as there is a lack of Interact pics. Then I took the bus with twin to Box Hill (asian land :D) for lunch. Went to this new place called An An 大头虾. Why there? Cos it said $5.90 for a bowl of viet noodles :) So we ordered a small sliced "rare" beef noodles and Bún bò Huế (beef and pork noodle soup but its not like normal viet noodles, its a tad spicy and just different) I've always wanted to try this dish since i read about it in Pauline Nguyen's cookbook/autobiography Red Lantern. I love that cookbook. 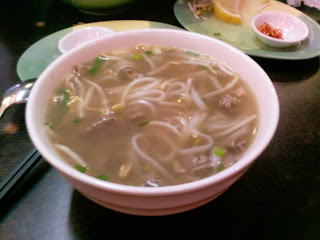 Small Viet noodle. Normally the beef slices are wafer thin and rare right? Well for some reason they were half a cm thick and cooked...not sure whether they gave us the wrong one or not. But it was quite good. Quite a bit of beef considering the amount of noodles. Not bad for $5.90 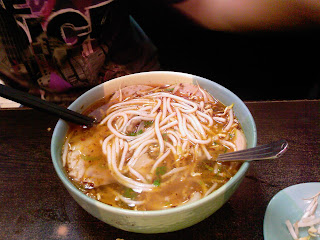 Sorry it looks half eaten but I didn't think of taking a picture until twin added everything in and was about to eat. There were 4 or 5 slices of pork (pork belly, that pork loaf stuff in viet rolls, and some other piece of meat that neither of us knew what it was) It came with round noodles not the normal flat rice one. The soup was just a tad spicy and a little sweet. But i loved it, it was delicious.
Would i recommend it? Sure thing, especially bun bo hue, it is soo nice. But since i've never had it before i'm not actually sure whether its a good bun bo hue or a bad one...
One last thing, who likes adding the viet basil in their noodles? Friends had a debate over it. I don't mind it but if i had a choice i'd leave it out.

Posted by teenagefoodie at 4:40 PM