Worst noodles I've had since I've come back to HK.
Smoked Duck Breast with Noodles in a Hot and Sour Soup. 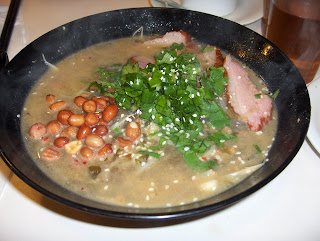 Looks good yeah? The smoked duck breast was definitely packaged. Tasted sooooo weird, like a smoked sausage with a layer of fat and duck skin. Super chewy clearish noodles that felt like chewing gum, not good for digestion. Deadly soup, doesn't look chilli right? I have no idea how much Szechuan pepper they put in but the chef must have been half asleep. I hate the numbing effect of Szechuan pepper,   it's lasts forever and ruins the taste of all other food you eat. Made my milk tea seem numbing. 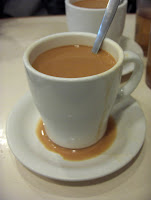 So why were the noodles evil? Not because the soup was chilli, well not exactly. Evil because it made my stomach feel horrible for the rest of the day. It wasn't exactly a stomach ache but it wasn't a nice feeling. 8 hours later and I'm still not feeling too great.


Verdict? Hating those noodles!!!!!
Service: The waitress who served us sounded like someone from McDull (for those who know who that is =P) Some random waiter was swearing at another one.
Value: $23(AUD$3.40) so I guess pretty good value. But not worth the stomach ache.
Taste: Couldn't taste much thanks to the numbing.
Posted by teenagefoodie at 2:26 AM