Today I went shopping with some friends at Mongkok. But before shopping I had to fill myself up with lunch. We went to a small honkie cafe and I ordered a bowl of Chicken Wings with Noodles in Hot and Sour Soup. Not the usual hot and sour soup, it was a clear broth that looked like chicken stock but was sour and spicy. HK$24 (AUD$3.50) with a drink. 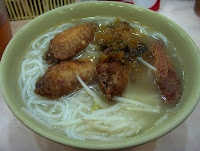 Shopped at Argle Centre for about 4-5 hours. Managed to buy 2 tshirts, a jumper, a jacket, socks and some snacks.
Was very hungry after shopping so we had dinner. RAMEN!!!! Ajisen ramen.....cheaper than Melbourne but taste is about the same. I had the sweetcorn ramen and it was sooooooo salty, so much msg it was crazy. At $40 a bowl it's decent. Noodles were nice though, the pork was small but fatty and there was a lot of other ingredients to mix with the noodles. The sweetcorn was a good addition and made the salty soup more tolerable. It also came with an egg but I don't eat hard boiled eggs so dad ate my one. 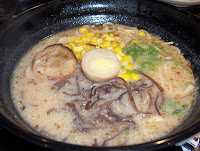 Vedict? If you have a choice, avoid Ajisen, they use a lot of msg but their ramen isn't too bad but there is DEFINITELY better ramen out there, just whether you can find it.

After dinner I wanted to go ice skating but people had ice hockey training so we couldn't ice skate. Just watched them train for a while, now I want to learn to play ice hockey. It incorporates two of my favourite sports, skating and hockey. I reallllllllyyyyy want to try it.
Posted by teenagefoodie at 3:03 AM