Been waiting for this place to open since it was announced that they'd be opening at Box Hill. There's already another two Petaling Street Restaurants around town so they must be pretty good. Finally opened recently and decided to go with K仔 for lunch. Waited for about 10 mins for a table for two, it was very crowded, this was at 1:30pm. Ended up sitting at a table with a man who was dining by himself. The renovations are very very nice, everything is RELATIVELY clean.
Had a very hard choice deciding between, Hainanese Chicken Rice, Roast Chicken Rice, Hokkien Mee or Curry Laksa. Due to the chilly weather and sudden craving for laksa I went with Curry Laksa. K仔 wanted the Asam Laksa (cos supposedly he hasn't had it in ages) but unfortunately they didn't have any today. Went with Nasi Pat....(forgot the rest of the word but in chinese it was 马来特别鸡蛋包饭) but essentially its seafood fried rice wrapped in a thin omelet.  (sorry about picture quality, taken with phone) 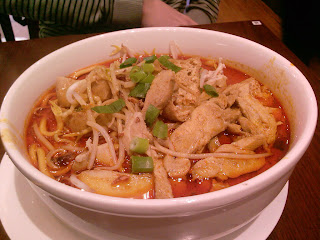 Curry Laksa $8.90
OMG, best laksa I've had in a very very very long time. Where to start? MASSIVE BOWL Tonnes and tonnes of chicken. Quite a few tofu puffs, actual tofu puffs unlike Ampang Tofu, grrrrrr. Lots of bean sprouts. A few large thick slices of fishcake. But the best part was the soup and noodles. The vermicelli noodles soaked up the curry soup really well. And the soup.....could have drank the whole bowl, cept the thick layer of oil was a tad off putting. One thing that I was not happy with was the clam, okay, I should be really grateful they actually have clam in it considering pretty much no where else does it. Even better it's actually a blood cockle like its supposed to be. So what's the let down? It is actually A CLAM, smaller than a 5 cent piece there is only ONE clam in this entire bowl. It's like finding a needle in a haystack. But probably one of the best/better curry laksa's around. 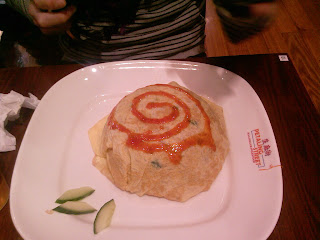 Nasi something =P $9.90
Didn't taste this, I was way way way too full. Looked pretty nice, had a few prawns.
Took over 30 mins for it to come though, seriously this dish doesn't even take 5 mins to make...
This was a really really big problem with most tables, anything that needed to be stir fried took over 30 mins to come out. All soup noodles came out really quick but everything else took too long.
Food: 8/10 Extensive menu. Authentic food. Really yummy. Worth your money.
Environment: 7.5/10 Newly renovated. A tiny bit cramped. Sat next to the dirty dishes tub. Saw a menu fall from the counter into the tub and return to the counter =S customers aren't supposed to see that.
Service: 7/10 All waiters can speak english and chinese. However when you ask a waitress about when you're food is coming after 30 mins they don't do anything about it. Ask a waiter and they'll go up to the kitchen and go "WHERE IS TABLE 20's DISH!!!! IF IT DOESN'T COME SOON THEY'RE LEAVING!!!"
Verdict?  Very good. Service needs to be worked on. Try to avoid busy hours as the kitchen just can't keep up. Don't come if you're in a rush unless you just want laksa. But definitely worth the wait. Can't wait to go back to try all the other dishes. YUMMMMMMMMMMYYYYY
The second floor has been separated and changed into a dessert lounge. Really wanted to go but I was way tooo full to fit anything else in, and a bit limited on cash. Sweet soups start at $5, no mango pancake or any pancake so I decided to give it a pass for the time being. In the top corner of the front shop window it says "Monga Desert Lounge" I believe they mean dessert not desert.

Posted by teenagefoodie at 6:43 PM