I've been wanting to come here ever since I found out there was such a place...except it was in Sydney. And when I found out we were going there when we were in Sydney I was pretty excited. I was actually quite willing to walk from Darling Harbour all the way there, before you go "it's not even that far...." it was December 30th and SUNNY AS *beep* at 12pm. My only escape was to walk in the shadow of the monorail track.
So when we arrived it was extremely PACKED and after a walk around I was quite disappointed as I had always thought it was a HUMONGOUS place but in actual fact there is only a few fishmongers there. However I was still overjoyed at the sight of all the seafood in particular the variety and amazed at the oyster shuckers. As retarded as this probably sounds I actually would like to shuck oysters as a part time job. 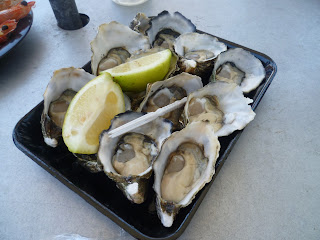 A dozen of oysters
Not exactly the cheapest oysters around but they are pretty fresh and good. Very creamy, not super strong in the oyster richness but what I liked most was that there wasn't that metallic taste. Oh so fresh =]
Except I don't get why they don't have like a mixed dozen which has all the different types of oysters on one tray...I mean if I was just one person I can't afford and handle eating 3 dozens oysters just to try out different ones. 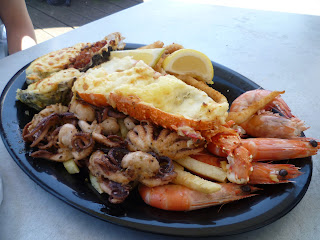 One of the seafood platters, around $50
Yeah.....probably wouldn't order this again...nothing was above alright on the entire platter. 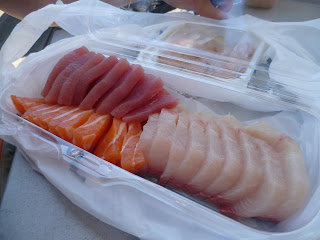 Sashimi salmon, tuna, kingfish,
Not cheap but somewhat fresh. I'm pretty sure the people who slice up the fish aren't sashimi chefs and they cut it really thin which I guess gives less bite and texture =[ Tuna was disappointing. We also got some sea urchin, I'm still not a fan of it, tastes a little bit like the sea and is super creamy. Why do people pay so much for it?
Verdict? They need a fish market like this in Melbourne!! Except next time I will probably get a dozen of oysters and some sashimi and just enjoy it slowly. Oh and I'd avoid lunch hour for sure.
Posted by teenagefoodie at 5:42 PM