We didn't plan to come here. Originally planned to go to Gumshara Ramen but when we got there IT WAS CLOSED!!! From Jan 1st till 14th =[ And it was Jan 1st. I was sooooo bummed. So dad took us to BBQ King because he was like all the gweilo's go there.
We walked in and it was really old school chinese restaurant. There was a really awesome feel to it, the waiters and setting all fitted into the environment. I don't have a menu so I'm just making up names. 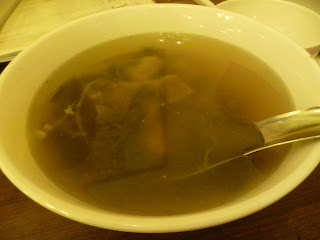 Complimentary Soup
Nothing special, except that it's made from duck bones. 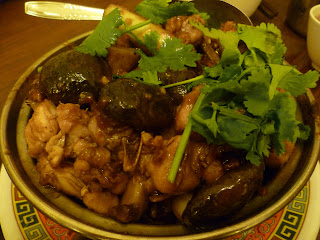 Chicken Hot Pot
Really nice, lots of chicken with mushrooms and LIVER (ewwww).Galicky and fragrant. Only issue was the bones. 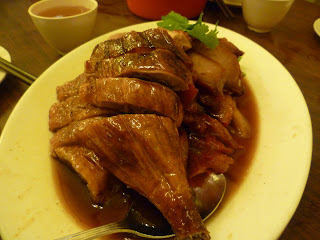 Famous Roast Duck and Char Siu
Char Siu was dry and salty. Duck lacked flavour and had a chewy skin. I don't get how it's famous. 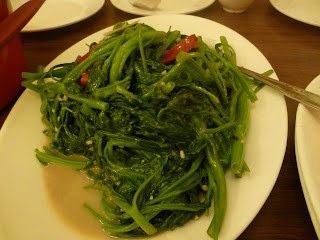 Stir Fried Water Spinach in Fermented Beancurd Sauce
Pretty average although it was a large serving.
Food: 7.5/10 Average chinese food. Chicken was alright though.
Service/Environment: 8/10 Staff were attentive and atmosphere was good. Hygiene questionable. Staff treat the gweilo way better than the asians =[ I guess cos they're willing to spend the $$$$
Value: 7/10 Overpriced by a mile. Half a duck for 20 something dollars????? And it wasn't even good =[
Verdict? Tried it once and never again. Rather spend that money at Mamak or on ramen. How does it have such a high percentage on Urbanspoon? Was it just our experience? Did we order the wrong things? Or are the gweilo just getting ripped off and don't know it?

Posted by teenagefoodie at 12:07 AM