I substituted some of the potato part for some other vegies because variety is good. Overall this was a pretty tasty dinner except I believe I blasted the juices out of the chicken by roasting it at 200 degrees in a fan forced oven, but dinner was already running late, I couldn't care less at the time. I will work on sticking to the recipe word for word next time. It didn't take too long to prepare, just shoved everything up the chicken's backside and chucked it in the oven. 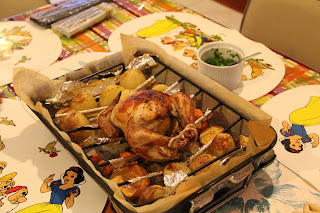 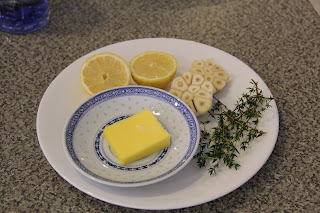 Ingredients: 1 head of garlic, halved. 5 sprigs thyme. 1 lemon halved. 1.6kg whole chicken. 30g butter, softened. 1kg baby potatoes. 2 tbsp lemon juice. 2 tbsp olive oil. salt & pepper. 1 cup chopped flat leaf parsley leaves. 1 garlic clove crushed (it says extra but it won't make a difference if you just take one from the bulb of garlic before u shove it into the chicken). 1 tbsp finely grated lemon rind (you want to do this before you cut any lemons up for shoving into the chicken or juice).

Method:
1. Preheat oven to 200 degrees (probably 20 degrees less if fan forced).
2. Place the garlic, thyme and lemon inside the chicken cavity and tie the legs together with kitchen string. (next time I think i would probably stab the lemon a few times, squash each clove of garlic and shove a bigger bunch of thyme up the chicken as the flavour didn't really come out very well)
3. Gently loosen the breast skin and push the butter underneath.
4. Place the chicken in a roasting pan with the potatoes.
5. Place half the lemon juice half the oil and salt and pepper in a bowl and stir to combine. Spoon over chicken and roast for 1h 15mins or until chicken is cooked through the the potatoes are tender.
6. Place the parsley, extra garlic, lemon rind and the remaining lemon juice and oil in a bowl, stir to combine and potatoes to serve. (I found that this sauce wasn't really a sauce, just like a salad of parsley so I added the chicken juices and fat from the bottom of the pan into it, it was delicious!)
Roast chicken, veggies and a beer for dinner =] Should I be advocating teenage drinking? It's just one beer and I'm legal. And hey it was the night before Australia Day. Celebrate in true aussie spirit *cough cough* 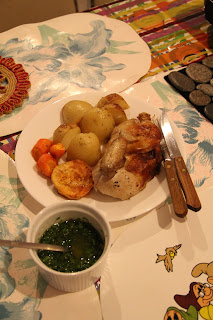 The recipe is supposed to serve 4 but I bought a smaller chicken as it was just my brother and I eating dinner that night. And like we always do we ate in front of the tv. This time we watched man vs food, do NOT watch this show when you're eating, it is gross.
Posted by teenagefoodie at 5:24 PM