This is about a month late. Damn I really need to sit down for a few hours and hardcore blog. Probably have like 10 posts still to write up =S.
So finally went to Laksa King with the boy who is a lucky kiddo and it was like the 3rd time he had visited there that month.
Unfortunately I wasn't particularly hungry so we decided to just share a laksa and get some dessert. 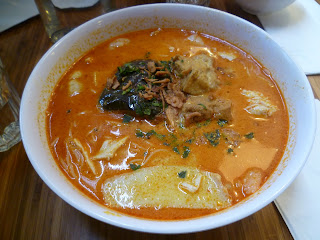 Combination Laksa $9.2
Laksa King is indeed laksa king. They have plenty of spices in the broth which is normally other laksa's fail as they only have coconut milk. Saying that the laksa did not lack coconut either, both were in balance. Serving size was good. K仔 said it would be better more chilli. 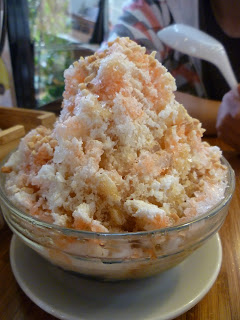 Ice Kachang $5.9
Not the best as it was almost impossible to eat without it falling everywhere. However it was refreshing and had lots of hidden treasures in the bottom. Can you see K仔 wanting to dig in in the background?
Also to the awesome waiter who offered me a job there, is the offer still available? I couldn't tell whether you were joking or not. I would love to work at Laksa King despite it being on the other side of town. Imagine all the laksa I could have =]
Food: 9/10 Laksa is probably the best I've tasted in Melb that I can remember of. Ice kachang was so so.
Service/Environment: 9/10 Newly renovated, cheery staff. Not sure about when it's packed. I went at around 2pm weekday.
Value: 9/10 Never match prices in Malaysia but considering the quality. Damn good value.
Verdict? I want to go there NOW just thinking back about it. Midnight snack!! But I doubt they're open. Do visit if you haven't before, even if you live ages away, it is worth it.

Posted by teenagefoodie at 11:49 PM