This place proves that you don't need to have a prime location to have good business. It's one of those places you will walk past and not even realise that it exists. However at No. 9 on Urbanspoon, it's doing quite well. Why? Because it serves good authentic food.
I never realised how ramen obsessed David Chang was until I started reading his book, and boy is he dedicated to ramen. And now he's made me somewhat addicted. If you give me a choice of soup bases for ramen I will always choose tonkotsu, always always always. Not saying the other ones aren't nice but I just love tonkotsu. 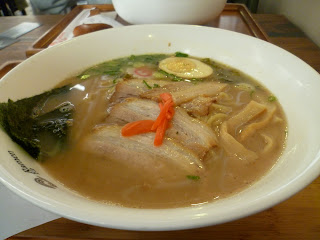 Charshu Tonkotsu Ramen $10
I always think $10 is starting to get pricey for a bowl of asian noodles. But here, that $10 is cheap and so worth it. Of course I chose the house specialty. Comes with four thinner than thin slices of charshu. Nothing particularly special, tasted a tad like the one I attempted to make, a slice of naruto of the same thinness =[, BAMBOO!! (Never realised ramen is supposed to have bamboo until I read Momofuku  and this stuff isn't that random canned stiff crunchy stuff, it was actually floppy), sprinkle of spring onions, seaweed sheets, picked alarming red ginger and half a boiled egg (unfortunately not the awesome soft boiled ones).
It was sooooo nice. Lots of soup to go with the large serving of noodles which were thick and chewy in a good way. Sure the soup was salty but it was delicious, so delicious you forget about it's saltiness which you are reminded of 30 mins later when you're thirsty as hell.
Probably be a long time before I'll get to eat tonkotsu ramen again =[ 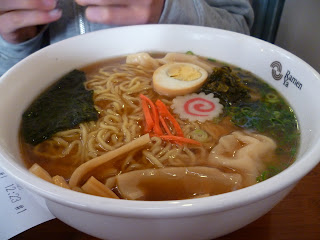 Seafood Gyoza Ramen-Shoyu base $10
Essentially the same except the charshu become gyozas. The gyozas aren't bad but I don't particular like any sort of dumpling which has a mushy/puree texture for the filling. Still like tonkotsu base better than shoyu/soya base. Nothing will change me. I know I'm stubborn.
Love the feel of Ramen Ya which apparently means ramen shop. Their spoons are even cooler, although it is a little awkward to use since it's so big. Reminded me of year 7 when we made wooden spoons for woodwork at school. Mum never used my spoon as she didn't know whether it was safe to use with food.
Food: 9/10 Based purely on ramen. They've got everything that should be in ramen in ramen I think.
Service: 8/10 Speak up when you order so the guy can hear you. Otherwise no problems with service.
Environment: 7.5/10 Nothing glamorous. Quite cramped. Only let down was since it was raining many of the chairs were wet although the place is covered water drips down the side.
Verdict? Cold rainy day + hot bowl of delicious ramen = comfort.
Did you know ramen noodles don't actually contain any eggs?
David Chang you have taught me so much =]

Posted by teenagefoodie at 11:00 PM