This place is so new that theres still someone out the front doing the final touches....now isn't that supposed to be done before you open? Well it's newly renovated and very modern. Encountered a problem before even entering, there's no front door...you naturally assume that a restaurants door is at the front right? But no, here the front is a window and a gigantic mirror. You enter from the side corner...who would have thought of that first? With no sign or person to direct you? Anyways I think that's enough about a door...I better not get started about having a pot plant on the tiny table...I think that was a first experience too. Not sure whether sitting next to planter boxes with flowers indoors was a first experience either. I guess it makes the meal memorable? 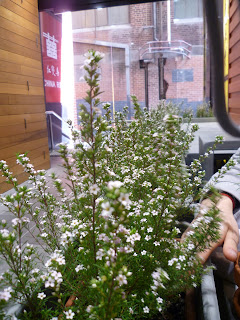 I think they should proof read their menu. Misspelling corkage maybe very minor but when it says "cockage" I think it needs to be fixed. Oh, and the numbers weren't in order but no biggie. 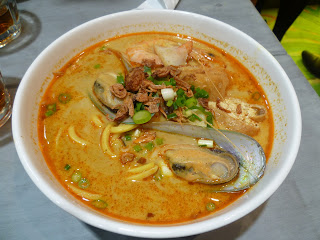 Kari Laksa $9.50
There are two Kari Laksa's on the menu, one is chicken one is prawn, same price, same name...
It came with two types of noodles, 2 large shelled prawns, 2 large mussels, tau pok (beancurd) and slices of fish cake, in my opinion there just wasn't enough to accompany the noodles especially compared to Coconut House's one from two days ago. However this bowl was bigger but I believe the noodle portion was about the same. The soup was pretty good, not too much oil and enough coconut milk. The chilliness was just right. One problem I didn't encounter was trying to figure out how to deshell the prawns and where to put the shells,  luckily the waiter saw me or heard me and quickly gave me a little plate. The prawns actually had a prawn taste which was excellent because prawns at restaurants nowadays are only about texture. Same case with the mussels. Overall a decent laksa. 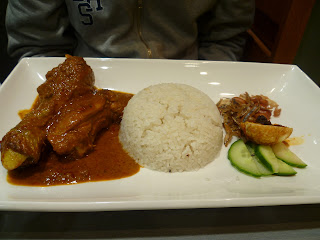 "Was definitely not what I expected. Expected A LOT MORE sambal and expected it to be served with a pandan leaf and like…an omelette thingy. But obviously this place has its own take on what a nasi lemak should be like….and I guess it just wasn’t to my liking. I guess I’m used to eating it in Malaysia so definitely there is more sambal and everything. Granted they did have everything as a nasi lemak is expected to have on a plate….but I guess just not to the right proportions? Love the ikan bilis though and nuts…BEST PART OF THE DISH! Followed by the sambal =D The chicken meat was tough…kinda tasted like it was old chicken meat and they might have just microwaved it or something =S was a bit….EWWWWEY!!! Rice was coconut-ey which was goooooooD!! Love coconut rice!! Yummy lah"
Food: 7.5/10 It's not bad but it's not spectacular. Prices are reasonable.
Service: 7/10 We were seated but not given menus. I'm sure it was just an accident though.
Environment: 7.5/10 It's modern. You sit at wooden tables and wooden stools like you're at the park. There's a pot plant on you're table. However this place is called Jalan Alor....I believe that it's not a park in Malaysia but a street filled with hawker stalls....with no pot plants on the tables. But not a bad environment for a casual date since it's sort of memorable.
Verdict? I would come back again and try some other dishes. China Red is literally next door, their touch screen menu is enticing too though.

Posted by teenagefoodie at 11:10 PM