I know I haven't posted much lately but I still have been cooking...unwillingly. Exams are in a few days and I'm still having to cook my dad and bro lunch and stuff because they don't know how to cook anything apart from instant noodles and fried eggs. So pretty much cooking lately has been a test on how fast I can whip up pasta or fried rice whilst clearing out the fridge for mum and satisfying dad's taste buds. Yesterday I made pasta-add-whatever-i-could-find. And since guys complain when there isn't any protein, a can of tuna was just chucked in. The end result wasn't too bad but I still believe that cream corned pasta would have taken a third of the time to make except that sounded revolting to dad. Trust me it tastes nice as.

On friday night I officially graduated from highschool. Why is it that food at functions is always so crappy? 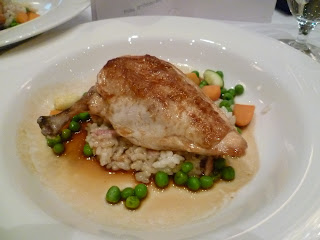 Oven Baked Chicken Breast, Pancetta and Herb Risotto, Seasonal Vegetables and Rosemary Jus
The chicken was alright, a roasted flavour and not too dry. The risotto was passable. Vegetables were vegetables. And I just found out that it was supposed to be rosemary jus, tasted like super concentrated(salty) stock to me. 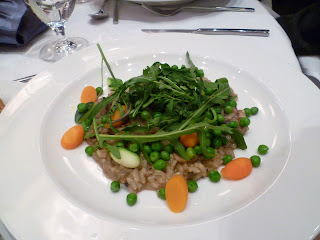 The vegetarian dish
I felt sorry for the vegetarians that night, it looked horrendous. Seriously?? I wonder if the kitchen staff would want to eat something that looked like that. Taste wise my bestie was not particularly impressed. 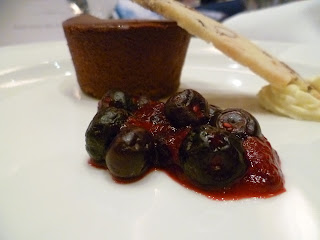 Dessert was better than main. Chocolate cheesecake wasn't too strong on chocolate flavour. Presentation was better. The biscotti was mediocre. Berry compote? Nothing special. 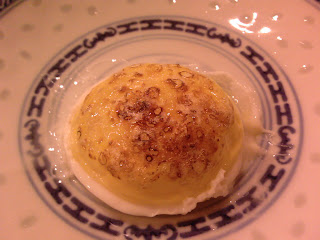 Something my bro and I created after watching junior masterchef. Tried to cook an egg yolk using a blowtorch, gave up and chucked it into the microwave then blowtorched it again.
So right now I really don't feel like studying as I'm starting to get sick but I must soldier on and get all these exams over and done with. Nov 11 = FREEDOM. The list of dishes I want to cook is getting longer and longer.
So probably bye bye for the next 2 and a bit weeks.
Posted by teenagefoodie at 6:26 PM