Sorry I don't have an address for this place or proper names for dishes as I don't have the menu anymore. But it's 2 shops away from Nandos at Devon plaza. Now there are 3 asian restaurants at Devon Plaza, Lucky Hut which I have yet to try and quite frankly don't particularly want to try, The Chinese Wok been open for a few weeks and the sushi place which I would like to try some time.

The Chinese Wok is tiny, seats probably max 15 people? They could fit more but I guess they chose comfort over cramming which is good. First impressions were not so great as one look at the menu and it seemed like "aussie" chinese food. After pondering for AGES at the menu, finding out that the meat dishes actually came with rice and being told that they made their own sweet and sour sauce I went with the classic....sweet and sour pork DUH! Mum wanted something a little more asian and chose something along the lines of Noodles with pork? 爆酱面was the chinese name if I'm not mistaken.

sorry for the crap quality, taken with phone 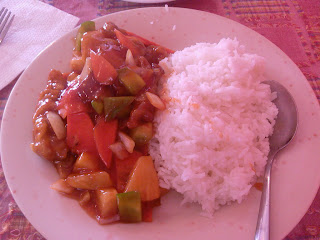 Sweet and sour pork $9ish
It wasn't radioactive red! The mound of rice was massive and I didn't manage to finish it. The pork tasted like pork and was battered and fried. The sauce was quite sour for my liking, maybe traditionally it is actually really sour, I don't know. It tasted like a home cooked meal made with love which is getting harder to find nowadays. The number of chinese places who do not give the shit about their food is quite scary and disappointing. 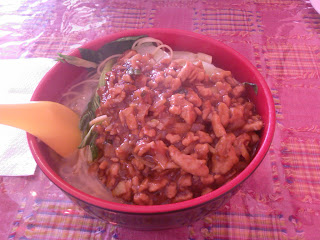 Noodles with pork $10ish?
Okay the name for this was actually a lot better sounding that the one I just made up. The bowl didn't look very big at first but it was filled to the max with noodles and pork mixture. It doesn't look that awesome but let me tell you it tasted AMAZING. The noodles were special and I don't know the exact name of them but they were white and almost spaghetti like just thinner. The pork mixture has a special sauce that I suspect was bean paste but it was soooooo good. All in a light broth. Just like chinese street food. If I were to come back I would definitely order this.
Food: 9/10 Tasted just like home cooked meals. We talked to the chef who was this lovely chinese lady who was so passionate about her food and making it the best. Got some takeaway chinese side dishes for dinner that night and they were so delicious too.
Service: 8/10 All the waitressing if done by this girl. She super friendly and helpful. She knows all the dishes. Only problem was we had communication problems, she spoke chinese to me and I tried to reply but she didn't understand me (a 42 in vce chinese means nothing, she couldn't even understand me trying to say chicken), so from then on I just replied to her in English whilst mum talked to her in canto and she replied to mum in English. It was messed up. But she speaks decent English.
Environment: 7/10 It's not fine dining. If it was in China this would be considered pretty good.
Verdict? I want to go back and have the bowl of noodles all to myself =] Hopefully the food won't change much.
Posted by teenagefoodie at 5:42 PM