So after a very disappointing muck up day because the teachers are sooooooooo uptight and restrictive my group of friends decided to out for lunch. I was going to wear my costume out but since if was already drenched from the insane non stop rain I decided to ditch it, soggy cardboard is no fun. Decided we wanted to eat buffet a few days ago but we had a bit of a dilemma choosing between China Bar Signature and Ma Ma Sichuan but since China Bar is soooooo far from school and more than double the price, Ma Ma Sichuan won. We're students who can't drive =.="

So pretty much it's $10 for lunch buffet from a bain marie + a can of drink. I can only sum it up by saying you get what you pay for. Sorry for the lack of pictures, I really couldn't be bothered as I was too hungry. 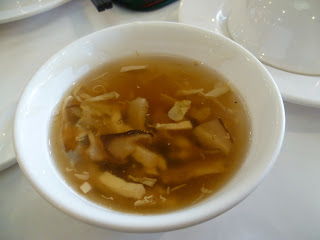 There were two soups to choose from. Corn and egg or the one pictured. Both quite bland and unevenly thick. Some more chicken powder might help =P The corn soup was so plain that if you added sugar to it it would have made a good chinese sweet soup/tang shui.... 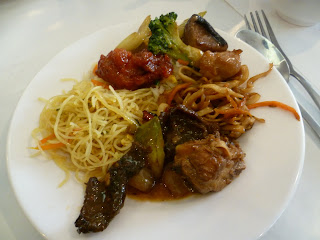 Since we arrived at around 1:30-2ish I believe some of the food may have been sitting around for a while, especially the fried rice as it had become so dry and hard...good dosage of msg was used to flavour it just like everything else. Preferred the non vermicelli fried noodle, probably because it wasn't as dry except it ran out and they didn't make more =[ Other than that everything else was like stuff you find at a little chinese restaurant in outback Victoria...stuff for the gweilow...okay I shouldn't say that. But highlighter red sweet and sour pork with more batter than meat and you know what I mean. 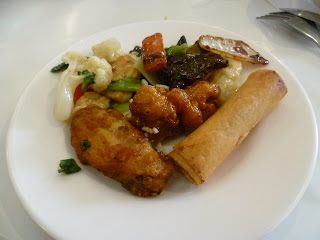 Second round consisted of some better food. Vegies cooked in msg, chewing gum beef with a hint of soda/alkaline flavour (how does that work, isn't that stuff used to make beef non chewing gum like? Wonder what cut of beef they used, probably one suited to braising not stir frying) Spring rolls were crispy and what you're average spring roll tastes like, just don't ponder about what it contains. The honey chicken was extremely sticky to the point where BITS of batter would be stuck to your teeth but it was pretty good. But in my opinion the best was the fried chicken. Fried chicken can never really go wrong =] Didn't try some of the things like pig trotters and chicken feet, just not for me.
A few rounds later they decided to shut down the station although we hadn't finished eating. We planned on staying as long as we could to get more than our monies worth and to chat but I guess that's not what the workers wanted and I don't blame them.
Food: 5.5/10 AVERAGE. At least all the dishes were edible.
Environment: 7/10 Pretty clean and spacious.
Service: 6.5/10 Waitresses spoke chinese to us ABC kids, we replied in our broken chinese 3rd language. They realised we were ABC and spoke to us in English after. Dishes were not taken away at all...it's a buffet though...
Value: 9/10 $10 with drink. If the food was a little better then it would be the best.
Verdict? Probably won't come back for lunch buffet but I want to try the sichuan hot pot buffet for $22 a head which is actually what this place specialises in. If you like dodgy chinese takeaway then you will like this place.

Do you feel ashamed when you hear a Caucasian speak Mandarin and Cantonese better than you can?
Posted by teenagefoodie at 5:29 PM