Ate lunch here with mum yesterday. Since they're extending/expanding one would assume that they are doing quite well which means that they serve decent food. And in my opinion, my assumption was right. 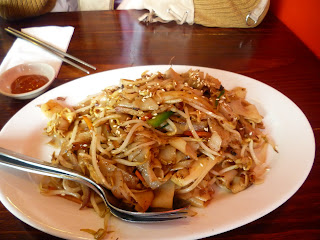 Char Kway Teow $9.50
Full of ingredients, however the only seafood present were these extremely crunchy prawns (with no flavour). Is CKT supposed to have fishcake and lap cheong? Because neither were present. Lots of crunchy beansprouts. Hardly chilli at all. Some egg, some char siu like stuff and little tiny pieces of something which I assumed to be pork fat but didn't taste like it...not sure what they were. Capsicum and carrot were some unusual additions. It was slighty brown but not as dark as what I'm used to seeing. Altogether it tasted pretty nice but not really like char kway teow, tasted a bit like singaporean noodles (星洲炒米) with hor fun(河粉/wide rice noodles) instead of rice vermicelli(米粉). 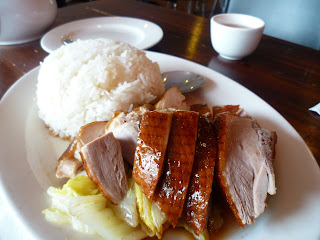 Roast Duck and Soya Chicken Rice $10.50
Just one selection is $9.00 but I couldn't decide between the two so we got combination. The soya chicken was alright, used to be better. Large pieces of meat, smooth elastic skin with soya sauce flavour. The roast duck on the other hand was surprisingly good. Also large pieces of MEAT, not just bone like some stingy places. The skin was crisp but there was only a thin layer of fat. Good for the health conscious, bad for the fat lovers like me. However encountered the same problem as we did for the take away roast pork last week, the BBQ meats were cold. 20 secs in the microwave won't do any harm right?
Food: 7.5/10 Pretty good, one of the top places around my side of town for Chinese BBQ meats. Extremely generous servings, Mum and I had trouble finishing both plates. A tad on the oily side.
Service: 8/10 No complaints about this. Waitress was nice (she had blue eyelashes o.o) Food came really quickly. And you are left to eat in peace.
Environment: 7.5/10 Contemporary Chinese furnishing. Not sure whether the open kitchen really works. Looks organised but cluttered at the same time. Though the ducks hanging in the kitchen to dry look pretty cool.
Verdict? I'd come back. Since they are so quick and serve decent food. Also it's along the way back from school so it's convenient. 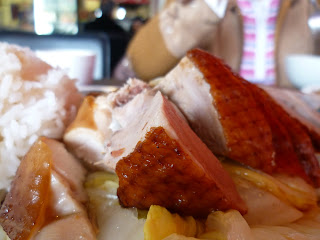 Look at that skin!
Drooling yet?
Posted by teenagefoodie at 11:59 AM