A honkie favourite. If you go to hong kong, this is something you should try. The most popular version is the noodle soup unlike the Malaysians/Singaporeans which prefer the dry version. I've actually never tried a dry version before. In HK, the price of a bowl of wonton noodles can vary greatly. The cheapest and most authentic are found at sidewalk hawker stall places (大排檔) for a couple of dollar(aussie) a bowl. My uncle told me, the way to eat wonton noodles is to eat all the noodles first otherwise they will soak up all the soup and taste soggy. Also some people like to add vinegar to their wanton noodles as sometimes the noodles have an alkaline taste. 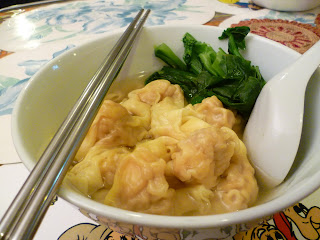 Don't exactly have a recipe. Done according to mum's "feel". 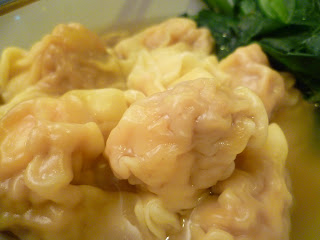 Only thing missing is deep fried fish skin. Sooooo yummy but you can't seem to get it here.


The following day we decided to finish off the other packet of noodles and also the rest of the wontons. 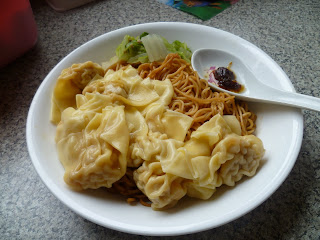 This time I attempted to make a dry noodle. Mixed the noodles with sesame oil, soya sauce, fish sauce, and kecap manis to get the dark colour. With some homemade sambal on the side. Pretty good, except the noodles were stuck together.


To be honest I think I like the dry version more. I always struggle to finish a bowl of wonton noodles in HK, and the bowls are quite small. However I can eat a lot of soya sauce noodles for some reason...
Posted by teenagefoodie at 10:41 AM