After attending a 3 hour lecture I was starving. I've been wanting to come here since I heard about it. Of course who better to go with than a Malay(or Aussie Malay). Wasn't too hard to find, diagonally opposite Drummond Golf. 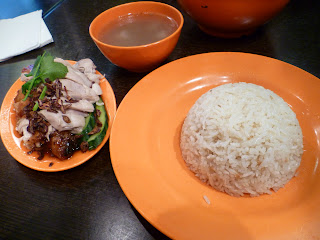 BBQ Roast Chicken and Hainanese Chicken Rice $8.60
I had to get this since it says it's specialty on the shop window. Just getting either BBQ Roast Chicken Rice or just Hainanese Chicken Rice is $7.60. Very good value. I can't say it's the best I've had but it's up there. The rice is quite fragrant and garlicky, a lot of the time the rice lacks the chicken flavour but this one was pretty decent.
The portion of chicken is quite large although the pieces are small which in my eyes is a good thing as you can actually fit the entire piece in your mouth with rice. The roast chicken was a little dryer than the poached but expected, it is a roast chicken. The skin was crispy. No complaints.
The soup was different to the usual msg chicken stock like soup. It was actually soup!! Like soup Mum makes except I don't think she's ever made this one. Maybe it's a Malay soup but I have no clue. It's a turnip and peanut soup. 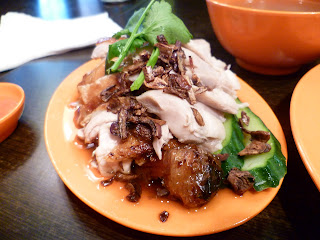 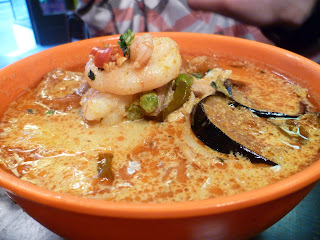 Traditional Curry Laksa $8 something
Heard good things about their laksa. I guess my expectations were a little too high. But nonetheless it was a good laksa. It has everything it should. Wasn't as chilli as I thought it would be. Only complaint would be serving size. You can get a snack one for about a dollar less and I seriously wonder how big that serve is since this serve was on the small-average side. I guess coconut milk makes you full.
The Malay/Aussie kid thought it wasn't hot enough in regards to the laksa and the weather(it was raining) for it to feel like Malaysia.
Food: 8.5/10 Good food. I guess it does live up to it's reputation. No complaints.
Service:  7/10 Only fault was the waitress wiped down the tables next to us but didn't wipe ours. No biggie.
Environment: 7/10 Little cramped.
Verdict? Gladly come back again. Great value, great food. What more can you ask for?
Oh, found out dad actually read blog post.....Hi again Dad =]

Posted by teenagefoodie at 11:28 PM