Been wanting to come here for 2 months now, ever since Steph told me it was alright. The name sounds pretty weird (kinda like meals on wheels) but it's far from that. It's actually a little Malaysian and Chinese Restaurant in a local shopping strip/area (Jackson Court). Wasn't particularly busy although many just buy take away as they do have a lunch special.

We ordered 3 dishes to share between the 4 of us. 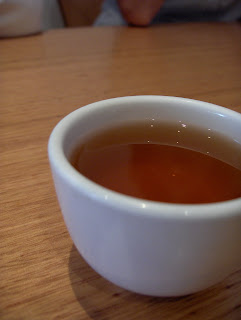 Got bored waiting for food so played with the camera. 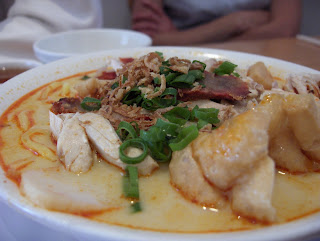 Curry Laksa $8.80
Not bad. Contained two types of noodles, chicken, char siu, fish cake, tofu puffs, spring onion and fried shallots. The soup was very creamy, in my opinion too creamy and not fragrant/spicy enough. Also it was not chilli enough for my liking. 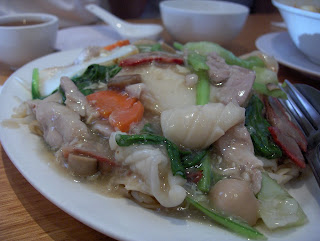 Ipoh Combination (滑蛋河）$9.80
Very average. Everyone complained there was not enough eggy sauce. My family loves their sauce when it comes to noodles. Also the noodles were really narrow/thin for some reason, I'm used to wide rice noodles for this dish. Didn't taste exceptional because the ingredients weren't as fresh as they could be. 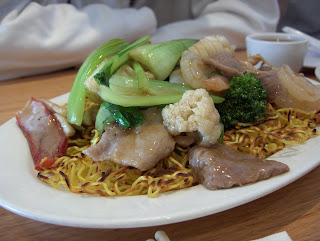 Combination Fried Noodle $11
Quite disappointed with this one. Dad ordered since it was the most expensive he thought it would be good. It turned out to be pretty much all the stuff in the Ipoh combination just with fried noodles instead and the addition of cauliflower and broccoli. But crispy noodles are nice =)
Should have gone with Hokkien Mee instead =.="
Food: 7/10 it would have really helped if the food was served hot not warm
Service: 7/10 one lady waited all the tables in the restaurant so you can't expect her attention constantly. She does do a very good job though.
Environment: 7/10 Everything is relatively clean and modern. Surprisingly spacious given the amount of space. Good lighting though.
Verdict? Not too bad. Pretty average. I think the only other malay restaurants around would be Rasa Malaya and Straits Cafe, I can't compare because I haven't been to either for quite some time. I wouldn't mind coming back here to try their curries but I probably wouldn't order what I ate today, there are a lot of other options on the menu. I think I had my hopes up too high for this place. But it's not a bad chinese restaurant, probably one of the better ones around in that price range.
Update!! New Petaling Street soon to be opened at Box Hill as La Porchetta closed down. I want to try all the Petaling Street restaurants around. So far I've only tried the Glenferrie Rd one, where I found out Assam Laksa is definitely not the dish for me. It's an acquired taste =.=" Also got to try the one at Glen Waverley, except that every time I go down to Glennie, I always end up at my uncles restaurant.
Posted by teenagefoodie at 8:05 PM