I don't think many people have reviewed this place yet. It's relatively new, on the corner of Springvale Rd and Burwood Hwy. At $55 a head for dinner on a Fri-Sun and Public Holidays, it's not exactly the cheapest buffet around. Also if you go on Fri-Sun + PH, there are two sessions, 6-8pm and 8-10pm. 2 hours actually isn't a lot of time to eat everything you want.

Last experience with buffet was in CHINA. Biggest buffet I've ever been to, it was bigger than two basketball courts, just MASSIVE. Tonnes and tonnes of food, downside, you have to line up for a lot of things, and therefore you waste your 2 hours. It was the first buffet I went to where I left still hungry.

So we decided to utilise our 2 hours by arriving before 6 (like everyone else that night =.="). It was very nice and clean, LOTS of variety, and all the food was pretty decent. I guess you get what you pay for. Didn't take a picture of seconds and the desserts I shared with doug. Best idea for buffet, share desserts so you can try them all =) 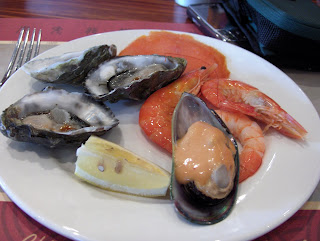 Of course start with seafood =)
Oysters: Average, very bland but they did provide tabasco in this massive bottle. But then again it's not a month that ends in ER for those who know what I'm talking about. (ended up eating 8 for the whole night. Couldn't beat doug, he won with 12)
Smoked Salmon: Very nice, rich oily flavour.
Peeled prawn: Surprisingly good as it had prawn flavour/sweetness.
Unpeeled prawn: Very firm texture, prawn flavour was about the same as the peeled one. Doug said "Better to eat the peeled ones as it saves time and tastes the same."
Mussel: No taste whatsoever, very watery for some reason.
Crab: I don't like eating crab cos it's such a pain, but my dad loved his crab I think. 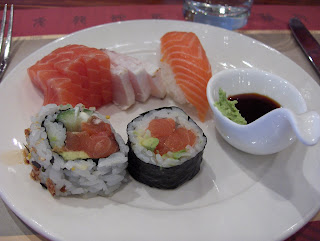 Fell in love with the sashimi chef guy, I'm pretty sure he's not jap but he can slice like a master, and he looks bad boy XD unfortunately i have a thing for bad boys.
Salmon: Good rich flavour
White fish: No idea what fish this was, but it was seared on the outside. Too bad the fish didn't have any flavour.
Salmon Sushi: Skip this one, wasn't the best.
Salmon Roll: Both were very good. 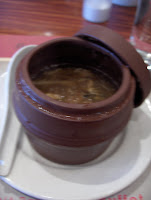 Hot and Sour Soup: Sorry about it being so blurry, but it came in a little personal clay pot. I was quite surprised at how good it actually was, good balance between spiciness and sourness. 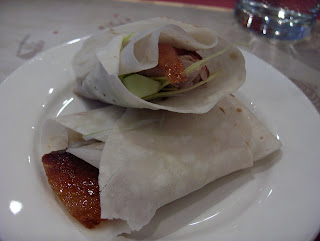 Peking Duck: Yes, eat all you want. The peking duck here isn't bad, the pastry is very thin and it's freshly made. Only downside is the duck wasn't exceptional, but acceptable. Ended up eating 3 =) 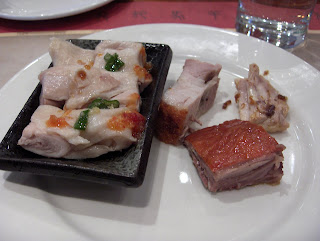 Chinese Roast Meats
Roast Pork: Pretty average, thick layer of fat and the skin wasn't super crispy.
Roast Duck: Huge let down, didn't taste very nice, no crispy skin =(
Hainanese Chicken: Alright i guess, comes with all the usual sauces. Could have been better.
Spicy Chicken: Not sure what it was, but it was garlicky and slightly chilli. Tasted pretty nice, good appetiser. 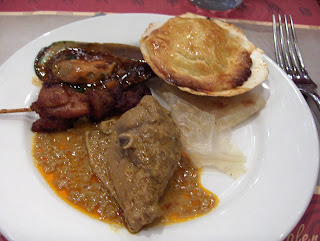 Xo Chilli Mussel: Still tasteless, mussels just weren't good that night,
Baked Scallop: Flavour crash, the topping was like the Honkie Pineapple Bun topping (sweet) and it just didn't go well with the scallop.
Satay Chicken: Tasted a bit weird to me, definitely better satay chicken out there,
Curry Chicken: I only tried one of the curries on offer, not a bad curry chicken, prefer the curry chicken at Yum Cha Inn though.
Roti: Hoping it would be better than it was, but it was good enough to mop up all the curry sauce. 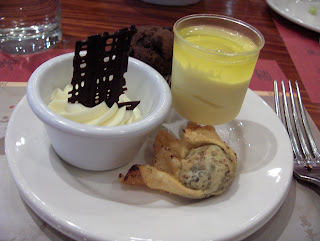 Chocolate Wonton: Interesting idea. Bite into it and there's all this melted chocolate. To my disappointment it was dark chocolate (WHITE CHOCO FTW)
Mango Mousse: OMG I wish I could have taken this home. It was sooooooo nice, creamy but light with a hint of mango flavour. Only problem, the spoon barely fitted into the cup. Even funnier, Doug tried the white wine jelly and the spoon was too big for the wine glass, so he had to use his knife to get the jelly out. They need to provide dessert spoons here.
White Chocolate Mousse: Almost as good as the mango mousse, I felt it was just a tad too rich after so much food. The chocolate decoration was very pretty though.
Chocolate Muffin: A chocolate muffin is a chocolate muffin. 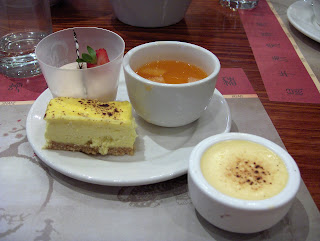 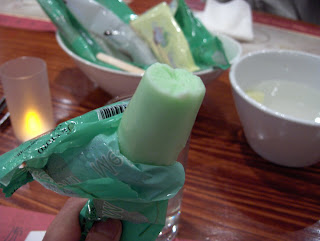 I was very SAD to find out they didn't have any durian icypoles like Wezblob said there was. I was looking forward to finishing the night with one. So instead i chose the melon icypole which was alright.

Verdict? Pretty good food considering it was a buffet. However at $55 a head, I'm not sure whether it's justified.


Food: 7/10
Service: 8/10 Dishes were whisked away very quickly.
Environment: Very comfortable and clean.
Would I visit again: Only if it was a special occasion or if I wasn't paying...I just don't have that kind of money to burn

Posted by teenagefoodie at 12:19 AM