Finally kinda have the time to post bout 2 days ago. Went to Mongkok with Wezblob, Wezblob's bro and my bro. Only for a couple of hours but we managed to eat quite a few things on the things to eat list and shop around the touristy places in Mongkok.
Day started at noon, unfortunately in Mongkok barely any shops are open at noon which we found out. Our first planned destination was Japan Boat for takoyaki but they were only starting to open and not making takoyaki yet so we detoured and went shoe shopping on Fa Yuen St (otherwise known as sneaker street). Couldn't find the shoe I wanted in my size. Managed to find a badminton shop to look at some prices for things before accidentally walking into Gindaco (another takoyaki store) and it was fully open.
Bought 10 pieces/balls? of takoyaki (5 were octopus, 5 were prawn). $38 (AUD$5.50) cheaper than Melb. 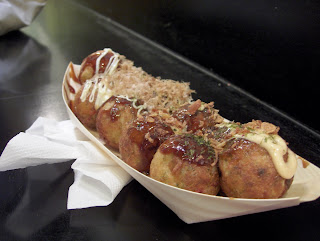 Taste? Crunchy on the outside, soft but a little too hollow on the inside. Nice big pieces of octopus/whole prawn. Good mayo and takoyaki sauce. 7.5/10

After Gindaco we went to Rose Sporting Goods or something like that. Specialised badminton shop, really wanted a little keyring but way too expensive. After looking at more shoes we ended back at Japan Boat for a second round of takoyaki. This time at $15 for 6....way cheaper than Gindaco but you get what you pay for. 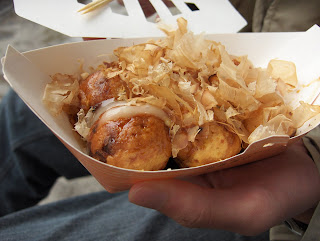 The guy at Japan Boat looked no where near as pro as the guy at Gindaco. Japan Boat takoyaki wasn't as crunchy but it was BURNING HOT, and the piece of octopus wasn't as big. The mayo looked like plastic and the takoyaki sauce was unusually sweet.

Then we went to ParknShop (supermarket) to buy "ice cream wrapped in glutinous rice wrapper" and decided to look for Hot and Spicy Pringles, failed to find them but found these instead :) 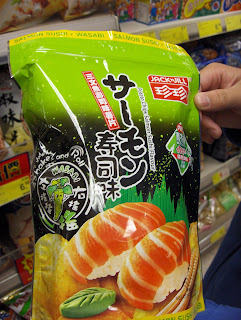 Tasted like wasabi flavoured chips...nothing special except for the price...$9.00....burning a hole in my pocket. Back to the ice cream thingos 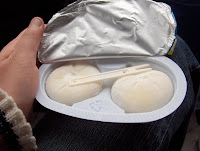 PURE HEAVEN. The pastry is 2mm or so thick, just like tang yuan if you know what that is, its chewy and tasteless. Then there's a massive ball of ice cream inside, I chose vanilla. At $9.50 a two packs (one pack contains 2) it's pretty good value. One the pack it says Mochi Ice so maybe that's what they're called.

After walking to Langham Place we bumped into a place that sold the all mighty Egg Shaped Waffle thing 鸡蛋仔. No  idea what it is called in English. Been craving it for ages, but honestly I actually ate this last week. 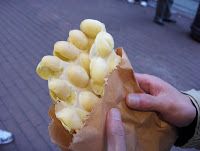 Freshly made :) on nom nom
It's crunchy on the outside, soft and fluffy on the inside. Tastes like a waffle just airier. You rip off the little balls and EAT IT.
ANOTHER MUST EAT!!


The afternoon soon ended with a McFlurry which was half melted for some reason and a trip to Muji where I got told off for eating in the store though I could NOT find a no eating sign anywhere.

One last thing. ANOTHER MUST EAT!! Had dinner with family and ate SUCKLING PIG *drools* This stuff is amazing, 10 times better than Chinese Roast Pork. 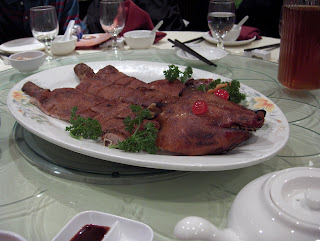 Yes that is a roasted pigs head on the dish, with cherries as eyes. You bite into a wafer thin skin that is crispier than ever, and then into a layer of fat which just melts and possibly into a tiny bit of meat. TO DIE FOR!!!....I think if you ate this pretty often you would die....so much fat

All in all, a day of must eats.

Posted by teenagefoodie at 4:11 AM