One of the last things on my list was claypot rice, looked online for a good place and found Four Season Claypot Rice in Yau Ma Tei. Went there at 7 ish, and the line was masssivee. Around 20 metres long but we decided to line up anyway even though you had to line up on the road. An hour later we finally got a table. 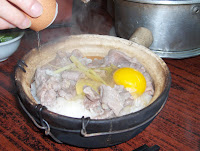 Beef Claypot Rice: I know it's a bad photo, had to be super quick as there was a massive line of people waiting for a table outside. So pretty much its beef on rice that has been cooked over a fire, it comes with an uncracked egg which u crack in and mix into the hot rice to cook it. Yummy! 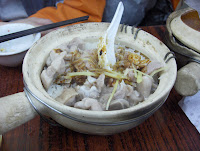 Chicken Claypot Rice: I have to say this was pretty average, nothing special about it. I'm pretty sure there is better claypot rice in HK. I remember having awesome claypot rice in WanChai about 4 years ago, but they aren't allowed to cook their rice outside the shop as it was dangerous for pedestrians passing by. 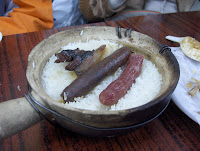 Preserved Meat Claypot? All these claypots didn't have English names so I just make them up. So pretty much its just rice with Chinese Sausage, Liver Sausage and Preserved Meat? Also extremely average... 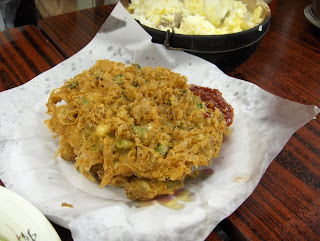 And then came the best oyster omelette EVER. I know it looks a bit weird but it was SOOOO YUUMM. Lots of little oysters that were packed with flavour in a duck egg batter with spring onions. Sure it was greasy but for some reason it was sooo nice fore some reason, I think it's because it's super freshly made with good ingredients. Very different to the usual oyster omelettes at Chinese Restaurants here. 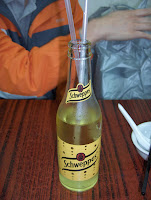 The restaurant didn't sell drink so you have to go down the street to a little shop that sells drinks. The soft drinks come in bottles, every time my parents see them they talk about how when they were my age it was like that too. So after drinking my favourite soft drink, cream soda, we returned to the little drink store to RETURN the bottle and 2 bucks back :)

Verdict? The one hour wait was worth it...for the oyster omelette :) And good value, just over $100 for dinner for a pot of soup with homemade fishballs, 3 claypot rices, a dish of vegies and 2 serves (4 pieces) of oyster omelette. All that for $15ish aussie for 4 people :)
Posted by teenagefoodie at 5:04 PM