Due to the disappointment of not being able to eat many mango pancakes in HK I decided to make my own 3 days ago to bring over to a family friend's. I discovered that it is extremely difficult to find a Mango Pancake recipe online especially in English. Found one that was posted on a couple of different sites so I went with it.The hardest part of such a simple dessert is making hte pancake because it isn't like any normal pancake, it is very moist, not fluffy, chewy and very thin. The recipe sounded simple but when it came to cooking them it was merely impossible to master due to the fact that no oil was being used and the pancake was getting stuck onto the pan. A nightmare to clean. So essentially the pancake is steamed in a pan....
The mango cubes and whipped cream was very straightforward to prepare.
Another problem I encountered was the pancake cracking after folding the pancake. I guess this could be because of several reasons. 1. The pancake not being moist enough. 2. The pancake not being thin enough. 3.Wrong batter?
I kept forgetting to take a pic until I've bitten into it. 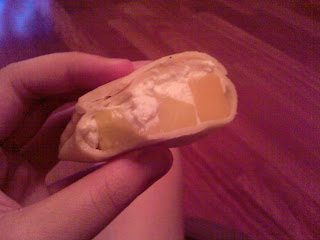 Taste? Similar but not close enough to what it is supposed to taste like. The mango was too hard, not fragrant enough. The cream was too whipped. The pastry was just wrong. I guess it was alright for my first go.
Posted by teenagefoodie at 11:03 PM