Met up with Nals for lunch today. I owed her a korean meal from november last year. Tiff tagged along since she didn't have anything to do after the neap bio lecture in the morning.
We walked through Chinatown and only saw one korean restaurant with 2 waitresses outside holding the menu convincing you to eat there. However that place looked expensive so we walked around for a bit more to find another place. Found one on burke st called White Tomato.
The environment was very nice, spacious but most importantly, it wasn't noisy like some restaurants in the city. Maybe it was because we went at 2:30, past lunch hour. The waitress spoke limited english, wrote in korean and was very pretty. I ordered a beef bibimbab, Nals ordered a chicken bibimbab and Tiff ordered a tofu seafood hotpot with rice which looked insanely chilli.
We managed to watch the chef cook and it looked very cool. Watching him move the wok, throwing it up and catching it again, the flame was fierce. 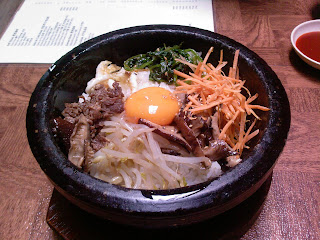 My meal. There was a tiny bit of beef compared to Nals' massive heap of chicken. I was disappointed at how unfair the different servings of meat was. I feel that a tiny bit more of each ingredient would have been better as after I mixed my rice up there seemed to be very little ingredients mixed in. Taste? Quite nice. A bit like fried rice but better. All the flavours went well together, I particularly liked the egg and mushroom. The beef was a bit on the bland side. Nals complained that it was too oily unlike the one she ate in Korea. But I guess the oil makes everything taste that little bit better.
I would definitely come back but to try a different dish, they had soooo many choices.
After lunch we went to the asian grocery store where they had 90c pocky which Nals got. We bought the mochi ice cream thingos for dessert just like the ones I had in HK.

From left to right.

Posted by teenagefoodie at 1:20 AM