Another place to cross off the list of places to visit, however I would like to come back here to try other dishes. The day started off with meeting K仔 in the city, getting everything sorted for Sam's 18th in the arvo. The patch of synthetic grass upstairs QV is such a nice place to just sit and relax. Except that it was Saturday morning and tonnes of little toddlers were running around full of energy. After sitting back and relaxing for a while we decided to go to Old Town Kopitiam Mamak for lunch since it was 15 metres away.

I have to say this place has this really awesome feel to it. It's just the way it has been designed, very casual and relaxing. It is very busy especially during lunch hour. I love the back wall of shelves of milo tins, holicks tins, evaporated milk tins and every other tin they use. Which made me wonder whether those tins will ever be used considering there are in perfectly even rows with no sign of usage. On the adjacent wall is the kitchen, open to view. You can watch them make roti and everything. There's just a sense of organisation and professionalism when you look into the kitchen, gives you peace of mind. K仔ordered since he actually knew what half the things were (being malaysian).
Sorry about the photo quality. 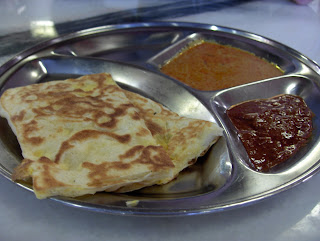 Roti Telur $4.50
Only found out what telur means after it came and was told it was EGG! Okay, eggs are not my best friend, I've never actually really liked egg at all throughout my whole life. But it wasn't as bad as I thought it would be. Roti was so yummy (especially compared to what I made the other day) however I have yet to try roti in Malaysia so I cannot compare. Curry sauce was nice and the sambal tasted really weird to me. It was surprisingly sweet and super chilli =.=" But K仔 really liked it, is it an acquired taste? K仔 complained this dish would only cost AUD$0.60 in Malaysia, but we're not in Malaysia so it's going to be $4.50 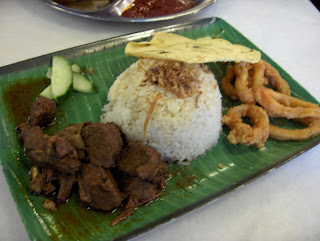 I can't remember the name of everything in this dish as I had an acute eye problem just as this was ordered.
It was part of this menu of where you get rice and a choice of various curries/accompaniments, price depends on how many you choose. This one was the most basic at $8. The rice had a strong lemongrass flavour which was a bit different. The mutton curry had a very very strong star anise flavour and the calamari was cold but still crunchy. Bit of a weird dish.
Food: 8/10 Quite a few things were quite unusual as I'm not used to Malay food. But lots of people ordered roti of some sort.
Service: 7.5/10 Not bad, I think majority of the waiters/waitresses were Malay. Service was quick as there were many staff.
Environment: 9/10 Personal opinion but I really like the feel of this place. No you don't get super comfy chairs, and yes you may have to share tables with strangers, but it is part of the experience I guess.
Verdict? I would certainly come back again. So many things I want to try on the menu. Sure it might seem a tad pricey of simple food but it is worth it. Not exactly food you can get anywhere. Also you know the people working there are genuinely dedicated to delivering good food and making it a good restaurant.

After lunch sat on the synthetic grass in the sun again waiting for time to pass. Soon to be followed by a long night of Wii, PS3, Mahjong, Twister and Poker. 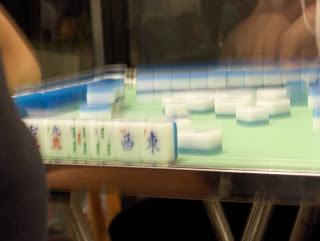 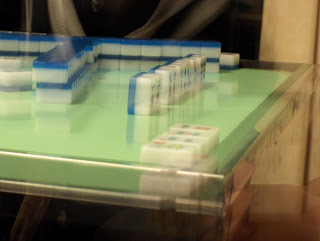 The rest of the night sort of became a blur, the effects of a few drinks and fatigue started to settle in for a few.
Only managed an hour or two of sleep due to constant chatting and a hard tile floor. It was a good night.
Gotta power through the rest of the day now, hopefully make it to night time.
I have a big stack of holiday homework waiting for me.
Back to work now.
Posted by teenagefoodie at 3:05 PM