Friday night again =)
Came home at around 5, feeling very happy since its a LONG WEEKEND!!
After making a cup-a-soup (of course my favourite flavour, Creamy Seafood Bisque) I took out the netbook to find recipes and ideas on what to make for dinner. 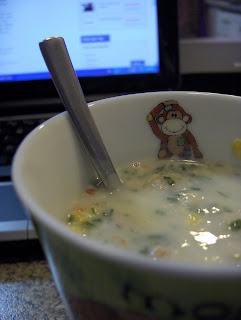 Decided on Pumpkin soup, Steak with roast vegies and Pavlova (using Donna Hay's recipe on the masterchef website since it was on the first ep of Masterchef). After 2 hours of cooking, dinner was finally ready. 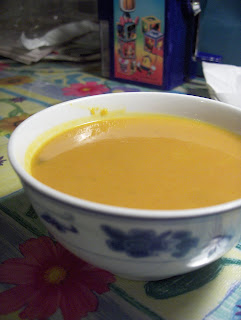 Ingredients: Pumpkin, half a red onion finely diced, 2 cups water, 1 cup milk, teaspoon of cumin powder, pinch of salt and my secret ingredient.... 3/4 teaspoon of chicken powder.
Method: Roast pumpkin for 45 mins. saute red onion until translucent. add pumpkin, stir into puree, add water, milk, cumin, salt and chicken powder, simmer for 20 mins. (because the pumpkin was so cooked I didn't need to blend it/puree it which was really awesome cos I'm too lazy to clean the hand blender.)
Taste? I really really like it, it would have been better if I actually blitzed it in the food processor or hand blender because it was a tad separated but it was still very good. I really enjoyed the hint of curry/cumin flavour. I didn't think the sautéd onion would add so much flavour to it, so simple but so nice. 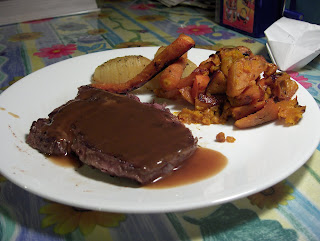 (Looks a tad unappetising)
Ingredients: Beef steak of your choice. Vegies of your choice + balsamic vinegar. Potatoes.
Procedure:
Steak: Season with salt and pepper and put a teaspoon of oil on each side. Grill on griddle pan to your liking.
Roast Vegies: Chop up vegies into whatever shape you want. Put them into a large bowl, drizzle with oil, season with salt and pepper, add a tablespoon or two of balsamic vinegar.
Roast potatoes: Cut potatoes in half. Place two skewers on the chopping board, place potato cut side down inbetween the skewers, cut the potato into thin slices (the skewers should stop you from cutting the potato all the way through). Drizzle with oil, season with salt and pepper. Roast for an hour. 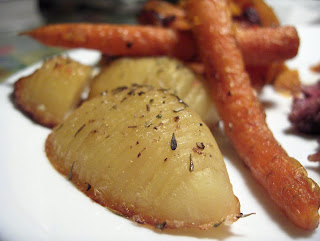 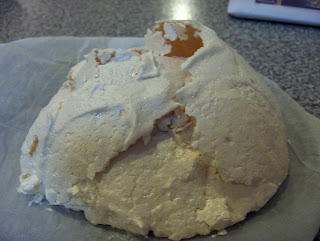 Have you ever seen a pavlova so screwed up? But hey its my first time making it. It looked like a big asian bun in the oven but when it came out it deflated =( Can anyone tell me why this happened? 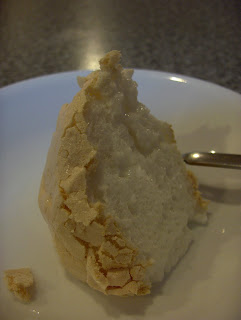 But it looked alright cut up =)
And it tastes very nice.
Lazy weekend =) Might cook some more over the weekend, I'll see. Wii or to cook...hard choice
Posted by teenagefoodie at 9:11 PM