Okay, technically China Bar isn't in the food court, it is located on the ground level next to Sushi Sushi next to the elevator. Arrived at around 2pm and it was still quite full and very busy. You could see the chefs at the back with smoking woks. 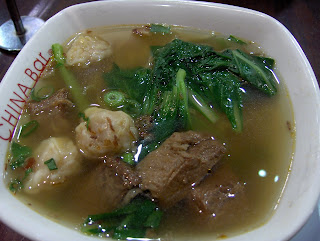 Beef Brisket and Wonton Noodle Soup $9.90
I have to say it looked a bit like someone threw the vegies and wontons on. But a relatively clear broth *ahem MSG*. Tried some noodles which tasted like what wonton noodles are supposed to taste like. The beef wasn't as meltingly tender as I expected, super dry and stringy. Maybe I just have high expectations. Didn't try wontons but I realised they were missing the floppy wonton skin end. They looked a bit like siu mai but like fully covered. What kind of wonton doesn't have the floppy part overhanging? Alright for $9.90, decent amount of noodles. 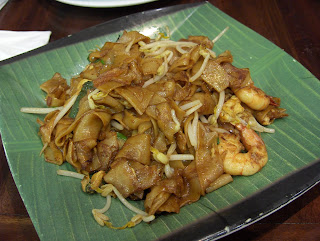 Char Kway Teow $10:50
Tossing between Hokkien Mee and CKT. Made a last minute decision to change from hokkien mee to CKT as I haven't had CKT in a while. Miss my uncles one, though this one is quite similar just not the same. No lap cheong (chinese sausage) in this one =[ my favourite. The presentation not bad, except a few garlic chives on the top would really just make it that little bit more appealing. Otherwise colour was quite good, evenly brown. Beansprouts were still crunchy, fishcake was fried on both sides, prawns were medicore. Good wok hei/smokiness and the garlic chives added that little bit of garlic flavour without it being overpowering. Best part of course is the deep fried pork fat pieces, crunchy and yummmmy. So unhealthy but whatever. Only complaint is serving size is smaller than other restaurants. However quality does make up for it so not going to complain as there are some pretty damn dodgy CKT out there.
They also offer frozen dim sum here where you just take it home and steam it to eat. Pretty convenient except it's not cheap. You can even get chicken feet, haha I don't eat that anymore, something about it that creeps me out.
Food: 7.5/10 Nothing spectacular. Nothing completely bad.
Service: 6.5/10 Unenthusiastic cashier person. Tables not very clean. Got given the wrong dish at first although there being a sign saying our number. However food does come out pretty fast.
Environment: 6/10 Sitting in the middle of a shopping centre is never ideal. Nor is sharing tables with strangers who stare at you.
Verdict? Yeah I'd come back to try claypot rice. Pretty good food considering it is a shopping centre. Still a tad pricey for a student. Especially for dim sum.

Posted by teenagefoodie at 1:19 AM