It was my 18th birthday a couple of days ago and I wanted to eat Japanese because it's my favourite cuisine. I believe that it is the best cuisine not just because of taste but for skill, refinement, respect for food and culture. But I better not start an argument here, everyone is entitled to their opinions. Friend went here and kept raving about their takoyaki (he loves his takoyaki) except when I asked him about the food here he couldn't remember anything about it (not a good sign). This place has been placing ads in the chinese newspaper for quite some time and they have a birthday special. If you go on the day of your birthday and you have more than 4 adults then the birthday person gets to eat for half price, and if you have more than 6 adults then the birthday person eats for free. Enticing yeah? And if you book 24 hours in advance, you get free oysters (max 6 per person, you have to tell them how many you want) I think I forgot the phrase, "some things are too good to be true", now you know where this is going.

So you can come in and order a la carte or go for the buffet for $27.50 for week nights or $30 for weekends I believe.
When I first walked in it felt like a cosy motel/lodge feel. Got given a menu and you can pretty much order anything from the menu except for specific sushi rolls...
*warning-half the menu will be described during this post 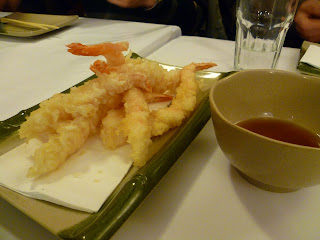 Tempura Prawns (6)
Relatively large, well battered and crunchy prawns. Not too oily. However prawn quality was a little disappointing. Also the prawn didn't really fit into the dipping sauce bowl (but that can't be helped). Good start to the meal. However the tempura prawns at Surf and Turf were a lot better but that was 2 years ago 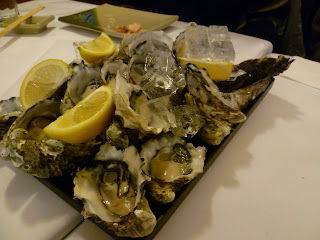 Oysters
I love seafood, raw oysters especially. This tray contains 30 oysters for the 5 of us. Very fresh and creamy. No complaints, just a big smile on my face. 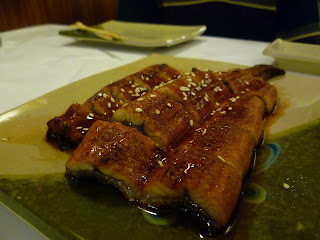 Unagi
Ohhhhhh, I didn't realise how much I missed unagi until I took a bite. The unique taste with the fatty skin and sweet sauce is sooooo delicious. However I do believe this comes in a vacuum sealed package and requires little effort except heating up to make. Craving Unagidon now, must get it whenever I get a chance to. 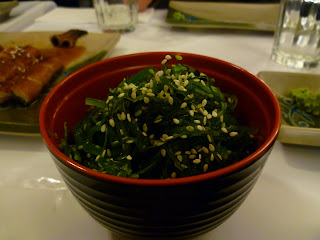 Seaweed Salad
I also believe that this comes pre made and highly doubt it was made in house as it was so green that the sesame seeds turned green. Very crunchy and refreshing, it was gone in no time. 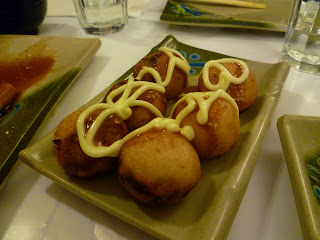 Takoyaki (6)
On first impressions I was a little disappointed, there appeared to be very little takoyaki sauce and no bonito flakes. However after biting into them I was pleasantly surprised, a fluffy ping pong sized ball with more than one octopus piece in it =] My friend was right. Later on we ordered another plate and it was even better than before. Crispy outside, piping hot on the inside and there were tonnes of octupus pieces inside. Best takoyaki I've had in Melbourne, or possibly ever. 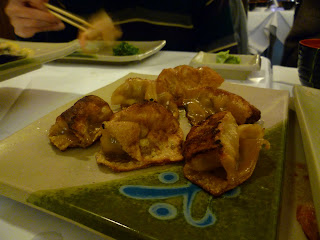 Gyoza (6)
Most interesting looking gyoza's I've ever seen, not the usual gyoza or dumpling shape. It was obviously steamed then deep fried or perhaps just deep fried and on the verge of being burnt. The wrapper was very crunchy and the filling was very average. 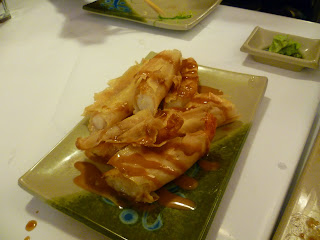 Wrapped Prawns? (6)
This was a chef special that was not on the menu. Prawns wrapped in spring roll pastry and drizzled with an interesting sauce. Nothing special about it although I felt like it belonged at Yum Cha not at a japanese restaurant, but I could be wrong. 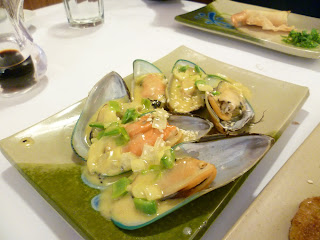 Mussels in Cream Sauce
This isn't on the menu either and is another chef special, however it is on the take away menu. The take away menu seems to offer more than the dine in menu, which is pretty weird. The mussels were medicore but the sauce was quite nice. Creamy onion sauce that had something else but I couldn't figure out what is was, could eat a tonne of these. Maybe it's because I love mussels. Ordered it again later and it wasn't as good as before. The sauce became liquidy... 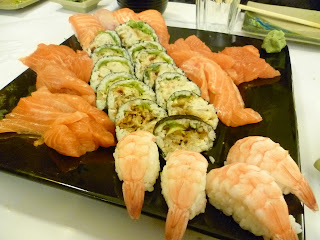 Sashimi and Sushi Combo platter with Soft Shell Crab handroll.
This was one of the first things we ordered and it took about an hour to come out. Contained salmon sashimi which was alright, not top notch but decent. Only one piece of kingfish (I believe it was kingfish) came with the platter and existed as a nigiri. How do you share one piece of kingfish with 5 people?? The soft shell crab roll was quite good. The batter still crunchy, you could taste the crab. However it fell apart very easily as there was not much rice to hold it together. 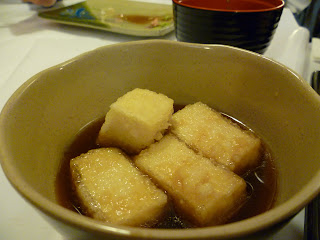 Agedashi Tofu (6)
someone ate some already
Since the tofu piece were so small and the sauce almost covered it there was very little if any crunchy parts. However overall it was very good, no complaints. 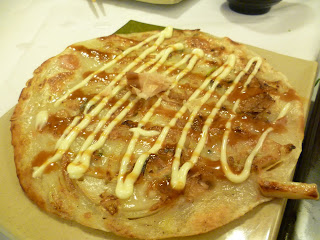 Seafood Okonomiyaki
Very battered filled okonomiyaki. Found only traceable amounts of cabbage. Seafood was frozen marinara mix. All together it wasn't too bad, didn't come cut up though so it was a tad hard to eat. It was a pretty good chewy pancake. 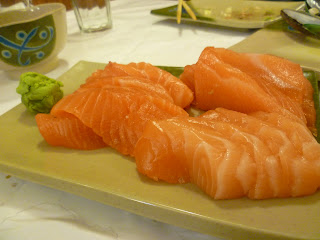 Sashimi
According to the menu this should contain salmon and kingfish, however the latter was not present. The salmon was good, crunchy and no sinewy bits. However it looked like the sashimi chef was getting a tad lazy or maybe it was intentional that some slices where very thin and some very thick. Not that it mattered, still sashimi. 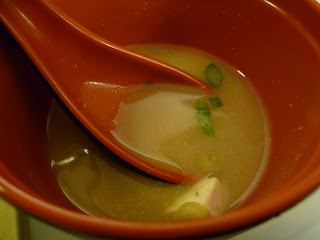 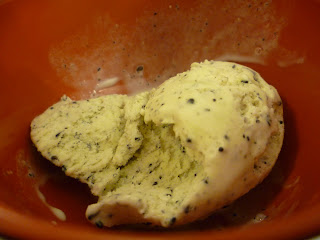 Black Sesame Ice Cream
I didn't try this one as I ordered the green tea one. Aunty could only taste vanilla, black sesame pretty much didn't exist except in sight. 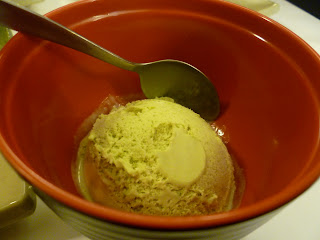 Green Tea Ice Cream
Little scoop of ice cream. Also experienced pure vanilla flavour from green ice cream. The waitress said that the chef personally makes the ice cream....*cough cough* does it require a chef to go down to safeway to buy a tub of ice cream to mix with matcha powder? At least don't be stingy with the green tea powder because you're wasting it since you can't even taste it.
Food: 6/10 Although there was nothing bad about the food, the quality of ingredients was just disappointing. Also the money saving shortcuts taken made a definite impact. Japanese food should be better because it's all about fresh good quality ingredients and no shortcuts.
Service: 5/10 A waiter and a waitress did all the work. However the waiter was new and literally had no idea how to many things. He didn't put our order through many times. He didn't know what some of the things on the menu were. At least train him before he starts work, or get him to learn the menu. The waitress was definitely more experienced and quite good at bs-ing her way through stuff. She was very friendly but when she got to excuses, she went round in circles. Asked whether I could have another bowl of ice cream and her answer was "sorry no, we only make enough of each for the night" I'm pretty damn sure you don't make the ice cream everyday and you don't know how many people come in every night AND you can't know how much of each flavour you will need each night because you're giving people a choice. Even the "but she's the birthday girl" trick didn't work. Sorry, tried to refrain from complaining throughout post.
Environment: 7/10 Very shabby. Seats sank in amazingly. Disposable chopsticks. Flickering light was beyond annoying. A bored and slow sushi chef on display was not pleasing to see.
Verdict? A lot of work and improvement must go in. I'm not sure whether they have many second time round customers. Because I probably won't be one unless it's a birthday dinner or something special. I can't say whether the $27.50 was worth it or not. In my opinion I'd rather go Surf and Turf if that place still exists.


Photos taken with my new camera which Dad gave me about an hour before we went out for dinner. Still getting used to it. Pretty happy with the pictures since I had no tripod and it was quite low light. Shutter speeds of around 1/8sec-1/15sec were used with no flash.

Posted by teenagefoodie at 5:07 PM