Been wanting to try out this place since it was renovating. Finally got to go there with mum for lunch today. Looks pretty decent on the outside, inside is pretty nice. However I seem to get this feeling like it's a bistro....I don't get why though. Took the waiter ages to figure out whether we should sit downstairs or upstairs...which was a bit awkward as we just stood there watching her look at the downstairs area and then look at the stairs a few times...
Lunch special is $10.80 with about 15 different choices and either a soft drink or coffee. I don't remember all the choices but there was Nasi Lemak, Curry Laksa, Wonton noodles, Fish head noodles, Assam Laksa, Hainanese/Roast Chicken Rice.
They have some pretty authentic stuff on their normal menu, serious not so famous hawker food. However if you aren't eating there at lunch a bowl/noodles will set you back about $12. I know that sounds pretty cheap but considering the prices of Malaysian food in Melbourne, that's starting to enter the higher price end. 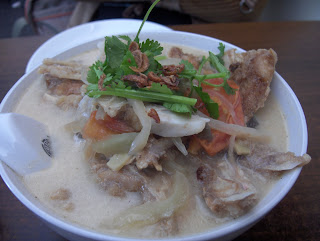 Fish Head Noodle Soup $10.80 with drink (latte)
I'm not a fan of fish head, so many bones. I tried some of the soup and it was like really comforting, a little under seasoned by I think it's better that way. I wouldn't mind a bowl of that soup with noodles for when I'm sick. 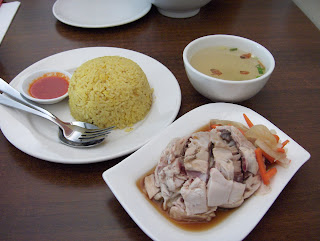 Hainanese Chicken Rice Set with soft drink $10.80
I was rather disappointed with my lunch. The rice was almost a highlighter yellow, lacked chicken taste, the chilli sauce lacked garlic, there was so little chicken (don't be fooled by the picture) most of the chicken was bone. The pickled vegetables didn't seem to go that well in my opinion and the soup was pretty average.
Mum asked for Sambal to dip her noodles in. The sambal tasted very good, really good flavours except lacked one thing. It was not chilli AT ALL!!!??!!

Whilst ordering my drink, I asked whether they had Teh Tarik and got a puzzled face from the waitress. Asked her in Chinese and she replied "no, we don't have that".
Now what kind of authentic Malaysian Restaurant doesn't have Teh Tarik??


Food: 7/10 Nothing special, could have been better but it wasn't bad. Very ungenerous portion of chicken, very generous portion of chicken bone.
Service: 6/10 Didn't encounter a single Malaysian waiter/waitress. Okay they can't be faulted on that. The waitresses do not speak a common language, some mando, some canto, no fluent english. No drinks served until you ask. Waitresses did not know which table was which, serving food to random tables. For some reason an old man with a walking stick had to sit upstairs, absolute inconvenience, what were the waitresses thinking?! Halfway through the meal I saw the waitress turn into the dish washer....in the sight of all the customers. In short, I dislike their service.
Environment: 6.5/10 Feels like a bistro. They have those little round bar tables up against the wall (out of the way). Noodles on the floor. Lack of lighting, only had natural light that was coming through shut blinds (which makes it very hard to take a decent pic of your food).
Verdict? Pretty average. It's not bad but it's definitely not good either. If I was given a choice, I think I probably would choose to go to Straits Cafe 3 mins down the road. Just my personal opinion. 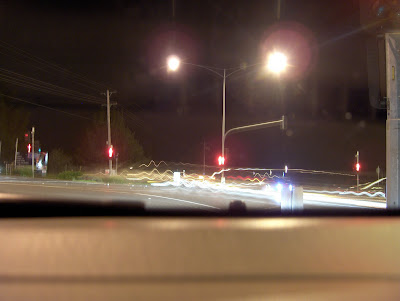 Posted by teenagefoodie at 12:02 PM