This post is long overdue. WAYYYY overdue. Started it almost 6 months ago and yet I still haven't finished it (decided to finish it for my 100th post). So pretty much this was after a 2 day food trip to Shunde, Guangdong, China. So 6 months on, I better finish it off. I hope I can remember all the flavours of the food I ate.

22/12/09
This place should be called Crazy Land. Everything is crazy. But back to food, so it was a 2 day trip to Shunde in Guangdong province. This is the city where my grandpa was from. I visited this city 4 years ago, nothing much has changed from what I see.
First day lunch 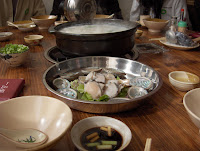 Another first. Ever tried congee hot pot? Sounds outrageous right? They firstly put a plate of chicken pieces and abalone into boiling congee, wait for it to cook and then you eat all the congee. Tasted pretty good, chicken was a bit tough, possibly because it was cooked at such a high heat. The abalone was tasteless but what can you expect. 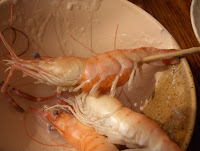 Then they put a new pot of congee on the fire and they non stop pour food into the pot of congee. And then the waitress keeps scooping the food into your bowl. Seriously non stop scooping, you can't keep up with her.
See anything weird about this prawn? Don't get to see it very often. It's filled with eggs, it wasn't my prawn so I didn't get to taste it. 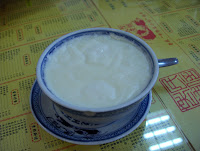 This is a speciality in Shunde. 双皮奶 literal translation double skinned milk. It's made my pouring some warmed milk into a bowl, then letting a skin form on the top. Then poking a hole in the skin and pouring all the milk out. Wait for the milk to cool back down, then mix in some egg whites and sugar with the milk, then steam?(i think steam) it until set. It's served either hot or cold. I like mine cold. Tastes like cold white chocolate custard...really really yummy. 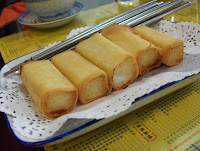 Deep fried milk? The milk is mixed with a bit of flour then wrapped in some pastry and deep fried. End result is crunchy on the outside, sweet and chewy on the inside. Pretty weird taste.

Dinner:
After walking around a random village with a crazy tour guide we finally arrived at the restaurant. Way too much food.

7/5/10-Picking up from where i left off.
So we were walking through the weird village. Didn't finish everything for dinner, the amount of food was just crazy. 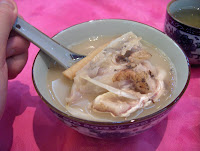 First up was this milky looking soup. It was made from fish. It was sooo nice to finally get to drink a decent bowl of soup after two weeks of eating out. (Yes I am very honkie and I like to drink soup). The soup was sweet from all the fish bones and had a very clean taste. Good start to dinner. 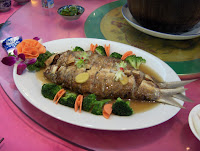 Next was stuffed fish. Yes stuffed fish, pretty much fish paste is stuffed back into an intact fish skin. How they managed that I have no clue but showed amazing skill. Unfortunately the taste wasn't as awesome as the idea. But it wasn't bad, pretty average. 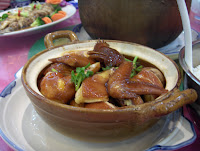 Can't remember what this was exactly. Some sort of soya chicken. I think it was quite good but I can't exactly remember. But chicken in China tastes very good, why? I don't think I want to know and neither do you. 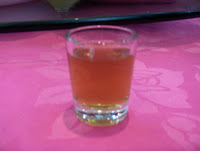 They also gave us a little jug of prune alcohol drink. I think it was something like that. Tasted very strongly of prunes and had the feeling of vodka. The warm feeling you get going down your throat.
Hehe, I totally don't drink XD 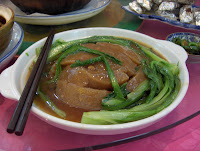 This dish was loved by the parents. It brought back memories of their childhood. Looks nice yeah? It's braised POMELO SKIN. Which is a lot like orange skin just thicker and not orange flavoured. I must say I did not like this dish, the skin had a very weird taste to it. The parents insisted all the kids try it. 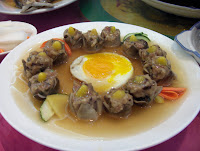 Another interesting creation. They look a bit like Shao Mai but its actually little straw mushrooms that have been split open and stuffed. The egg in the middle looked pretty cool but I'm not sure what it's purpose was other than presentation. Taste wise it was pretty average. 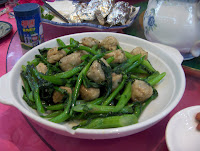 Another specialty of the area. It's fishballs I think. The fish in this area is really good and theres lots of it. Although most of the time it tastes really average, it's something you can't get here in Aus, something that should be treasured. 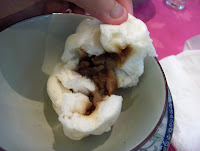 Char Xiu Bao was overrated. The tour guide made it sound like it would be really good. But actually I've had way better ones here. Stuffed my face with them just so they wouldn't go to waste. The ultimate Char Xiu Bao is at Tim Ho Wun in Mongkok. THE BEST ONE EVER.

So after dinner we were taken back to our hotel. Which happened to be next to a "nightclub" 夜总会. And nightclubs in more rural China ain't exactly the same as our nightclubs, not that I've been to either. So the "nightclub" was actually part of the hotel. And from the lobby of the hotel they had a massive clear wall looking into the nightclub side, and all you see it a staircase with Chinese girls all lined up dressed nicely waiting...

So this was our room for the night. Have you ever seen anything like it? Actually I have from my previous trip to China 3 years ago. What's with the clear window from the room into the bathroom? AWKWARD 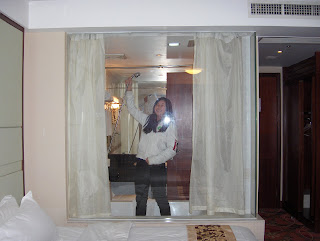 So after 2 days of stuffing ourselves the tour concluded.
HA, that's not the end. My foodie uncle took us to this restaurant in Shenzhen which we ended up going to another 2 times during the course of our trip. The restaurant is higher class but the prices are like DIRT CHEAP in Aus terms. 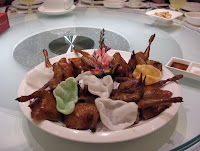 The cheapest and possibly the tastiest roast pigeon I've ever had. At like AUD$2 each it was like AMAZING. So succulent and juice, the skin just perfect. Everything was just perfect about it. 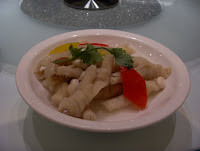 Chicken Feet. EWWWWW, something I haven't eaten in about 10 years and I don't want to eat. It didn't look too bad but I just can't make myself eat it. Might be a bit hard to see but it's peking duck. Wasn't the best peking duck every but it was pretty good. Loads of crispy skin, cucumber, spring onion, sauce and a thin crepe. Just missing something, not sure what but it just wasn't outstanding. Not to mention it was epically cheap, like AUD$5-10 for like 15-20 serves. 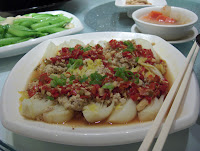 Some chinese vegetable which looks a bit like bak choy but all yellow...I didn't like this dish, not many people did. It was also pretty chilli. The flavours just didn't go.


So the day ended there. Where we took a train from Lo Wu home.
This post it finally done =)
Wouldn't mind a bowl of cold 双皮奶 right now.
Posted by teenagefoodie at 11:26 PM