Decided to make a Honkie Style breakfast for mum this mothers day. Honkie breakfasts have a Western influence to it. My mum's favourite is Macaroni in Soup, Scrambled eggs, Bacon, Buttered toast and a honkie milk tea. However breakfast turned into brunch due to two things. 1: It took a lot longer to cook than I expected, thought I could do it in 30 mins, ended up taking 1h 30 mins due to my poor time management. 2: got home at 1 last night and went to bed at 2, tried to wake up at 9 but failed, unwillingly got out of bed at 10 to make brekky.

Method: (the way I should have done it)
Fry bacon a little bit under. Whilst bacon is frying, cook pasta according to packet. Put the 6 tea bags into a pot of boiling water and simmer until you're just about to serve breakfast (i know it sounds insane but u need it to be as dark as possible). Drain pasta. Reserve about 500ml of the pasta water. Pour the can of chicken stock into the pasta water and bring to boil. Cook eggs (however you want them). Add a tsp of condensed milk into each cup. Add about 1/4 of a cup of evaporated milk on top of the condensed milk. Stir to combine. Lightly toast the bread (honkie toast is always just toasted so it is barely even golden/yellow) and butter. Place pasta back into boiling stock. Place bacon back into pan to heat through. Ladle pasta and soup into bowls. Sprinkle with shredded ham. Place bacon, eggs and toast onto a plate. Take pot of tea and pour into cups through a strainer to catch any stray tea leaves. Serve all together. 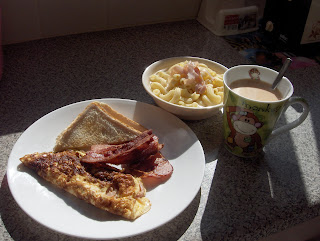 I made a ham omelet instead.
I like the idea of putting the milk into the cup first, whether it makes a difference I'm not sure. Just how some honkie people do it. Also evaporated milk makes so much of a difference.
Unfortunately it didn't taste anywhere near as good as the breakfasts you get in HK and it was no where near as cheap. HK $20 can get you more than what I cooked. Thats about $3 aussie.
Posted by teenagefoodie at 5:09 PM