One more exam to go!!! Then 3 month summer holiday. I can't wait.
So just a quick review.
I don't remember the last time I came here and I wonder if I ever have. I think they're supposed to known for making a good bubble tea but I didn't order one and it was a sunny hot day, what was I thinking? So after flipping through the menu many times I decided on Korean Chicken in Special Sauce but it turned out that it didn't come with rice and rice costs $2 extra. It wasn't exactly the price that made me change the mind but the fact that there would be a large serving of fried chicken that I was certain not to finish. Changed to the Taiwanese Pop Chicken Rice instead, little did I know that that serving would be quite large. 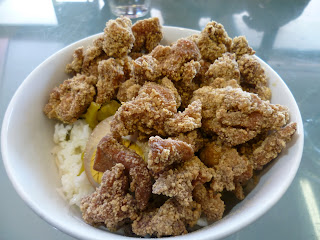 Taiwanese Pop Chicken Rice $8.90
I know it doesn't look like a lot but it was, just have a look at all that chicken compared to the egg underneath. The chicken was crisp and well seasoned. It wasn't too oily tasting which made eating a lot of it easier. Underneath the chicken lays a soy sauce egg and some preserved vegies. The rice was really plump and oily from the chicken, did I mention there was a heck of a lot of it? In the end I only managed to finish half  and doggy bagged the rest home. K仔 couldn't help me as he conquered his own mound of rice. 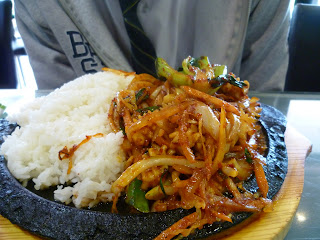 Korean Spicy Squid Rice $10
I just made up that name as I have forgotten it. So pretty much it comes on a sizzling plate filled to the point where its going to fall everywhere. The squid was tender but probably out of a frozen packet. The sauce sweet and a little spicy but not as chilli as it looks. It came with kimchi and some potato cubes on the side.
Food: 7.5/10 Nothing out of the ordinary. Could cut back on the oil.
Value: 8/10 Pretty good considering serving sizes.
Service/Environment: 7/10 Looks relatively new except could be cleaner.
Verdict? I'd come back to try the bubble tea. It's Box Hill, the list of restaurants I have yet to try is endless.

Posted by teenagefoodie at 11:48 PM