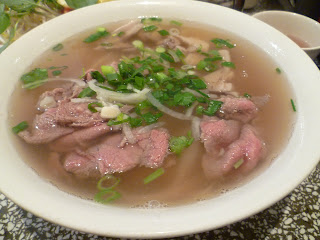 Went out with friends to celebrate the end of everyones exams and ended up at Pho Dzung for dinner.
Chose the rare sliced beef and chicken pho. It was good but not the best. Every element seemed to be lacking something tiny that would make it extraordinary. The soup was really good. The chicken could have been better. The noodles were perfect. There could have been a little more onion. But overall a pretty good pho although it's not as good as what you get in Richmond/Springvale/Footscray it's probably the best you can get in the city. 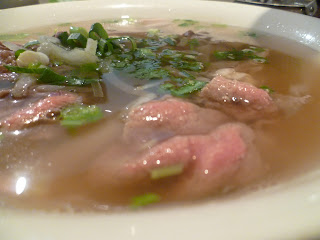 Probably the last bowl of pho since summer's just round the corner.
Food: 9/10 Pretty good, except just seemed to be lacking something
Service/Environment: 7/10 Cramped. Waiter was emotionless and it was hard to tell whether he could hear you. However he managed to memorise 6 orders.
Value: 7.5/10 $8.50 for small and then a dollar more for each size upgrade. Pho is cheaper in the suburbs but dinner for under $10 in the city is pretty good.

Verdict? Only place I go to for pho in the city. Anyone know a better place?

Posted by teenagefoodie at 6:32 PM