Haven't done a food post in a while and after this one it might be a while before I do another one as study is getting quite hectic at the moment.

Woke up today intending to do homework but ended up cooking an omelette for breakky instead of opting for dad's porridge. 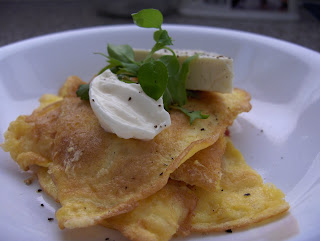 Ingredients: An egg. Shredded ham/salami/whatever filling you would like. Grated cheese.

Method: Note: This is an asian omelette made a bit like a pancake.
Separate egg. Whist eggwhites to soft-stiff peaks(this makes the omelette fluffier). Add in egg yolk. Add in filling and cheese. Give it a quick whisk. Pour into pan as if making a pancake. Fry until golden then flip like pancake. Fry until other side is golden. Serve. I served with some mayo and a block of Laughing Cow cheese.

Made dinner on Friday but it was a bit of a disaster so I don't think I'll blog about it. Also made macarons on Saturday but that was a disaster as well. Macaron madness in our household at the moment.