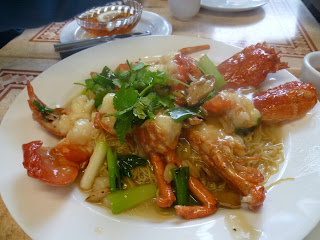 Lobster on egg noodles
One lobster. The meat was burning hot. Firm but not rubbery and flavoursome. The lobster was pretty fresh. Overall it wasn't bad except for one minor thing. The sauce was quite thin and didn't coat the noodles and lobster very well. Seasoning was perfect. Plenty to share around for 4 people. 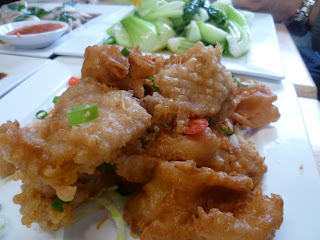 Pork Ribs in Spicy Salt
Crunchy batter which was a little too thick in my opinion. Also could have had a little bit more spiciness to it and more meat. 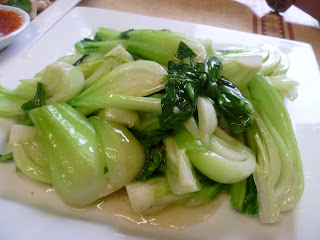 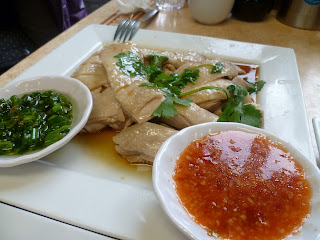 Hainanese Chicken
My favourite dish and also their signature dish. Large amounts of meat. Smooth, silky and the skin still has that springy crunch if you get what I mean. The chilli sauce wasn't too chilli and was quite sour whilst the spring onion sauce had a little msg or chicken powder or something similar added to it. Hainanese chicken rice is only $6.90 here. 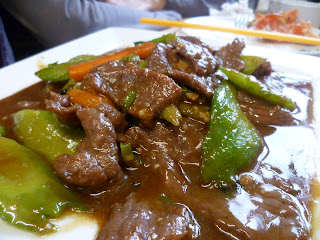 Stir Fried Beef with Bitter Melon $12.80
We added this on top of the banquet meal as we had 5 people. Wasn't too bad except for once again a runny sauce which the stir fry bathed in. Good thing was the bitter melon wasn't bitter at all.
Food: 8/10 Overall it was pretty average chinese food. Hainanese chicken was above average.
Service/Environment: 6/10 Wait staff were stretched to the limit and there were 4 or 5 wait staff for a classroom sized restaurant. Not the cleanest place and very cramped. It is insanely busy at night.
Value: 8.5/10 The lobster here is probably on of the cheapest in Melbourne at the moment. Good quality. Except other dishes are pretty average. Hainanese chicken rice is probably one of the cheapest as well, but don't expect the best.
Verdict? Probably only for cheap lobster, hainanese chicken rice and the stir fried pipis. YUMMY

Posted by teenagefoodie at 11:16 PM