This wasn't where we planned to eat for the night. We planned to go to Laksa King except we didn't book and there was a 30 minute wait for a table. However because we were already running late we didn't have the time to wait for a table so we decided to just eat somewhere else. We ended up at where Laksa King used to be, except now it is a Vietnamese restaurant, and yes they do actually serve laksa there. But we went with pho since it was raining and we thought it would be quick. Boy were we wrong. Turned out to be the longest wait for pho I've ever had. 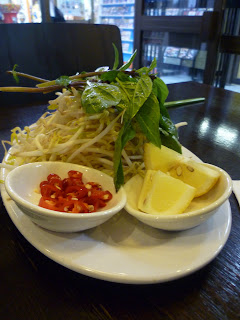 Why can't they just cut the lemons into wedges?
Why random shapes where you can't squeeze? 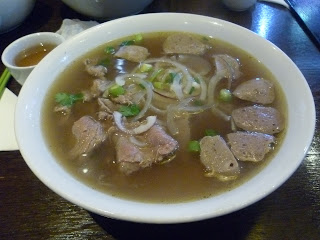 Beef and Beef Ball Pho $10.80
One sniff and I knew that this was no ordinary pho, and no I don't mean that in a good way. One taste of the broth and my fear was confirmed. This was epic star anise broth, the aniseed flavour was so intense. I'm not sure whether this was intended or if there was an accident. It got better as we ate on as our tastebuds became accustomed to the taste. However there was also another problem. When I read beef balls I did not expect randomly chopped beef balls, how many full beef balls were in my bowl I still don't know but it sure wasn't more than a few. Other than that it was a pretty average bowl of pho.
Food: 7/10 Not a fan of aniseed flavoured broth.
Service/Environment: 7/10 They gave us a dirty teacup which I can overlook. But when my bro showed it to the waitress telling her there was a massive green blob (of something we did not want to know that wouldn't come off) on it she was errrrr would you like another one? as if she was unsure of what my bro was implying....maybe I interpreted the situation wrong
Value: 7/10 At that price I can get a large(meaning massive) bowl of pho in Footscray/Springvale/Richmond/Box Hill/City.
Verdict? I'd rather Laksa King even if there's a bit of a wait. But don't get me wrong, if you love star anise then go ahead and try this place.

Posted by teenagefoodie at 1:01 AM