On Sunday, at Queen Victoria market was the Malaysia Festival which mainly consisted of delicious food. There weren't many stalls, I would say 15 or so including a chorizo and churros one, a takoyaki one and a few tornado potato ones. If you've been following this blog for a while, you'll probably realise 80% of the time I eat out it's Malaysian food. It's no coincidence, I love the cuisine. 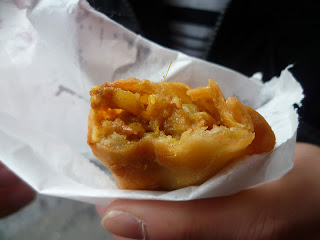 Curry Puff $2
From the stall that sold the satay, I really wish I looked at their stall name because their satay sticks were sooo good. The curry puffs, crisp but nothing spectacular inside. Not saying it was bad but the quality of the other foods on offer were just so high. 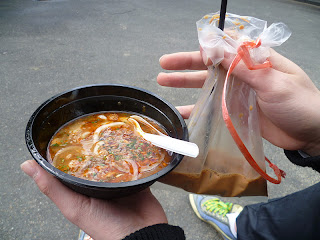 Assam Laksa $5 and Teh Tarik $3
I was expecting a msg flavoured soup with soggy mushy noodles but this was good quality assam laksa. The noodles were very springy still except the fork provided were incredibly inappropriate as the gaps between the prongs were a lot thinner than the fat noodle. But the noodles weren't the highlight of this dish, it was the soup. They were definitely not stingy on the ingredients, plenty of fish and spices, giving the soup a massive punch of flavour. The teh tarik was decent but not amazing as it wasn't very "pulled" but had a strong tea flavour. The bag it came in was like in true Malaysian style. There was more in the bag than in the picture, it was just too tempting before I took a picture. 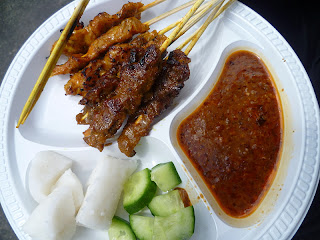 Satay $10 (for 10)
Best satay I've had in Melbourne hands down. They were done on charcoal which gave it that delicious smoky flavour. The beef had a little fat on it which made it even tastier whereas the chicken was leaner but still incredibly delicious. The satay sauce was the proper stuff. A little part of me cries every time I read a satay recipe that only uses a jar of peanut butter and coconut milk to make satay sauce, it is so much more. Lemongrass, shallots, garlic, spices all combine to make an incredibly delicious sauce. The pressed rice cakes were great for soaking up the rest of the satay sauce. This satay reminded me a lot of the ones from Mamak in Sydney. 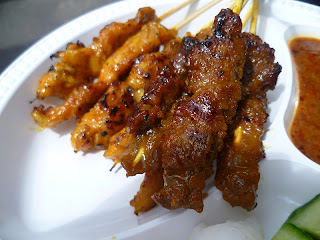 The charred crispy bits =]
Most definitely coming back next year. Hopefully they promote it a bit more as I only found out from the boy who got an email from the Malaysian club at uni. There were a few flyers up at uni but they weren't very noticeable.
Posted by teenagefoodie at 11:33 AM