Today I finished school at 1pm so I went out for lunch with my mum and my bro.
We went to this place at Tunstall Square, Donvale called High Tea Inn which is actually an Asian restaurant.
I think someone recommended it to mum saying their fish head noodles are really good. So of course mum ordered it but unfortunately mum loved it so much she didn't share any with us :( And also she devoured it before I even got a chance to take a pic. So I guess I can only describe it. Two reasonably large crunchy fried fish head pieces (which mum said was salmon) ontop of a bowl of udon style noodles in a slightly creamy broth. Mum was loving it so much she didn't even hear me talking to her =.="

Doug had a viet style Lemongrass Pork on Vermicilli noodles with spring rolls. However he also was too eager to eat and ate a springroll before I took a pic. So there is a springroll missing in this pic. 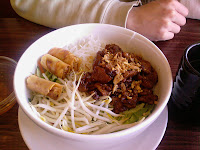 Doug said it was pretty good. The springrolls were hot and crunchy, and the pork was quite nice. I realised he savoured the pork till last.
I ordered a Hainanese Chicken Rice as nothing else on the menu really appealed to me, most of the other dishes were Vietnamese and I'm kind of over Vietnamese food after making pho a couple of days ago. 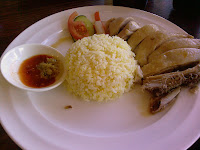 I can't say it was the best Hainanese chicken I'd ever eaten but it wasn't too bad. However I did realise it didn't come with soup like most Hainanese Chicken dishes come with. But it didn't matter because I had my awesome Honkie Milk Tea. 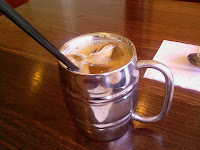 Awesome cup yeah? These are the types of cups they have in HK! Don't see them here very often. Love them. They make me miss HK. Milk tea was very honkie although it got a tad watered down by the ice. But all in all it was a good lunch. Service was great andthe food came quick. The place is newly renovated I think, very modern and spacious. Can't really say anything bad about it.
Posted by teenagefoodie at 4:19 PM